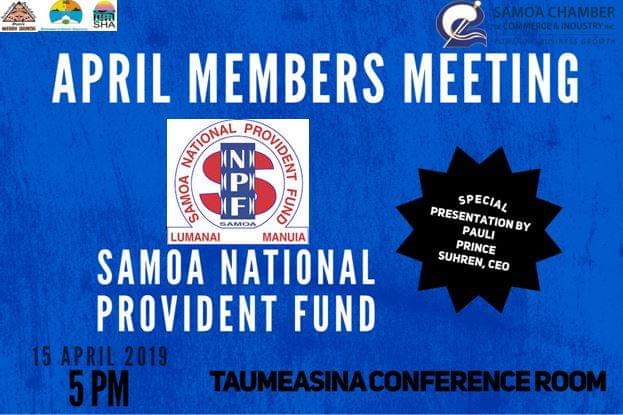 The Samoa Chamber of Commerce will be hosted by the Samoa National Provident Fund (SNPF) for it’s next monthly members meeting scheduled for this coming Monday 15th April 2019.

The SNPF had announced an increase to the compulsory supperannuaton deductions from the current 7% in a staggered approach over 3 years to 10%.

The members monthly meeting is expected to address the proposed increase which Chamber’s President Jennifer Ula-Fruean says needs more time to be consulted with employers.

In a press statement sent last week, the Chamber President said, “We feel this particular proposal has not been widely consulted and notified to Chamber and its employer members.”

Samoa Chambers Monthly meeting notice is set out below:

Our next members meeting will be hosted by Samoa National Provident Fund on Monday 15th April 2019, 5pm at the Taumeasina Conference Room.

This meeting will feature a special presentation from SNPF CEO, Pauli Prince Suhren. RSVP for our event by calling us now on ph: 31090 or email samoachamber@samoachamber.ws #PoweringBusinessGrowth