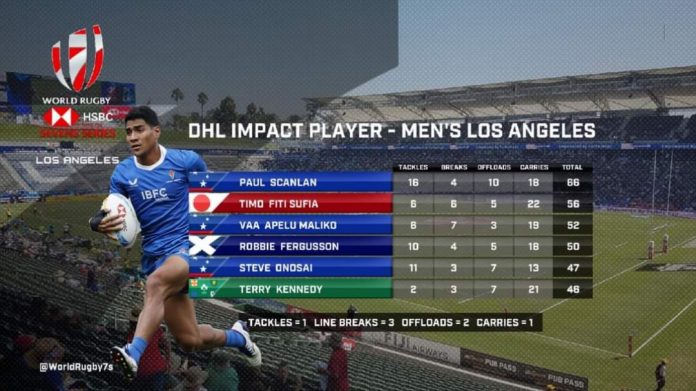 Samoa’s Paul Scanlan ended the HSBC World Rugby Sevens Series on a high, as the most impactual player of the LA Sevens.

The Moata’a rugby club speedster was on fire over the weekend, topping the table with 16 tackles, 4 breaks, 11 offloads and 20 carries.

And every Samoan fan across the globe will remember the extra time quarter final against Argentina, when Paul Scanlan took an inside ball from Vaafauese Apelu-Maliko and sped to the tryline to secure their 4th semi-final spot in just 5 tournaments.

Samoa dominates the Top 6 best players in LA, with Vaafauese Apelu-Maliko in 4th and Steve Rimoni-Onosai in 5th place.

DHL says the Impact Player of the HSBC World Series recognises the players making a difference in all areas of the game and all corners of the pitch, “highlighting the try makers and not just the try takers”.

Manu Samoa Head Coach Muliagatele Brian Lima shifted Scanlan from halfback to the wing in LA – a move that proved to bring out the best in the 26 year old former national soccer player.

Scanlan made his soccer debut for the Samoa national team at the OFC Nations Cup in 2016 as a 20 year old, and in December 2019 Scanlan announced he was leaving football to pursue a career in rugby.