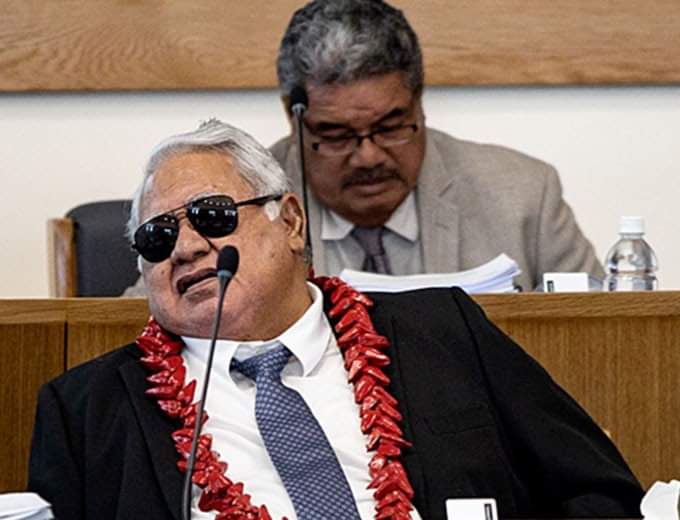 The Samoa Prime Minister Tuilaepa Dr. Sailele Malielegaoi says the alleged assassination plot by Australian Tala Pauga is “one of many” he has endured throughout his 40 plus years in politics, not including the vile unsubstantiated accusations.

Prime Minister since November 1998 and a Member of Parliament since April 1988, Tuilaepa brushes off the latest plot to assassinate him, saying there are too many to count.

“We would probably need at least a few more storeys of a 100-storey building to make room for them all”.

The latest plot, however, seriously implicates Australian Talalelei Pauga, currently fighting his extradition from Brisbane to Samoa in order to stand trial.

Three men have been charged in Samoa and the evidence points to Pauga being the main instigator of the conspiracy, sending funds to and arranging a firearm and transport for a hitman in Samoa.

Taualai Leiloa confessed to being the intended hitman of this conspiracy and was sentenced to 5 years imprisonment by Justice Tafaoimalo Leilani Tuala-Warren on the 22nd of December 2020.

“A conspiracy to murder the Prime Minister of any democratic country of the world is an attack on democracy itself.. it cannot and should not be taken lightly”, she added.

Meantime, Pauga has been fighting in the Australian Courts for a stay in extradition with claims the charges against him are politically motivated and he will not get a fair trial in Samoa.

Despite the would-be hitman currently serving a 5-year prison term directly naming Pauga in the conspiracy, Australian media continue to report Talalelei Pauga’s side with suggestions that Samoa’s call for his return to stand trial is unfounded.

They report Pauga’s position made known through his lawyers, echoed by protestors that he would not get a fair trial in Samoa.

None of the Australian media reports have mentioned Samoa’s Supreme Court rulings in relation to the conspiracy to murder the Prime Minister.

According to the Police Summary of Facts accepted by Taualai Leiloa, he was provided with a weapon, a vehicle and money to carry out the assassination. He was also given directions to locations where the Pime Minister would be at certain times.

According to the defendant, most of his instructions were given by Mr. Tala Pauga via messenger from Australia.

Mr Leiloa told the Samoa Police as well as matai from his village that he was first contacted by Pauga in May 2019 via messenger. Mr Leiloa says Pauga then called him via video chat and relayed that he wished to have the Prime Minister killed, and asked the defendant if he had the courage to carry out the proposed assassination.

The court ruling sentencing 39 year old Taualai Leiloa notes his confession that Pauga sent him the money to do the killing, with money transfer receipts and messenger texts as evidence.

Leiloa said they told him to target locations such as the Si’usega Catholic village church where the Samoa Prime Minister prays and the Savalalo Fish Market that he frequents in Sunday morning.

The would-be assassin, however, admitted in Court he had no intention of doing what was asked of him, and that he only went along with it to get money.

The conspiracy was first reported to the Samoa Police by the Council of Village chiefs of the village of Laulii, when they noticed Taualai and his wife driving around in a car which they did not own, and money they did not normally have.

The Press Statement from Samoa’s Attorney General in response to ABC is published verbatim.

As Attorney General of Samoa, I can confirm that Samoa is still awaiting the extradition of Mr. Talalelei Pauga as already requested of Australia back in February 2020.

Mr. Pauga is one of the three defendants, who have been charged with the offence of ‘conspiracy to commit murder’.

‘Conspiracy to commit murder’ is a serious offence under section 106 of the Crimes Act 2013, which carries a maximum penalty of life imprisonment.

There is sufficient evidence to support the charge against Mr. Pauga, and he must be brought back to Samoa to stand trial.

The concern is that Mr. Pauga will not get a fair trial is unfounded.

Our laws provide protection for individual rights such as the right to a fair trial and our Court system also guarantees that any defendant, including Mr. Pauga, will receive a fair trial.

The plotting of the assassination of the leader of an independent country is illegal and is an offence punishable by life imprisonment.

Therefore, our action to extradite Mr. Pauga is not politically motivated at all. Mr. Pauga must be brought back to Samoa to stand trial.

The Attorney General is duty bound to pursue the extradition request of Mr. Pauga and institute criminal proceedings in Samoa as there is sufficient evidence to support the offence alleged to have been committed by Mr. Pauga.

At this stage the Attorney General is awaiting the outcome of the extradition proceedings in Australia.