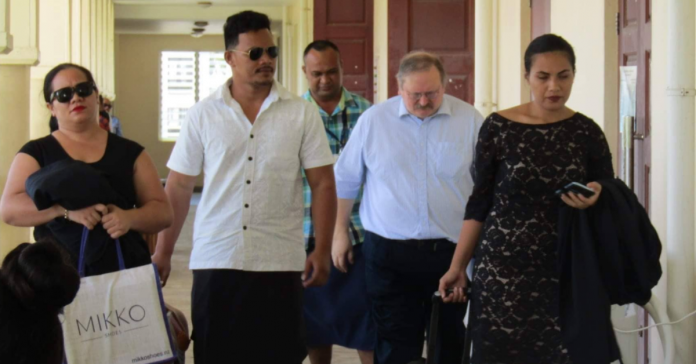 The judge only murder trial of Kolani Junior Lam continues into the second week as the long list of prosecution witnesses are called to take the stand.

A Pathologist fellow with over 30 years experience, it is Dr Botterill’s prfessional opinion that former UTOS CEO Sa’u Justina Sa’u died from, “a neck compression most likely from strangulation, with the use of fingers or a rope or even both”.

This was reported by Samoa Global News back in January 2019 when prosecution had presented this in open Court while arguing against bail for the defendant.

Dr. Botterill performed a post mortem on the 2nd of November 2018, just 2 weeks after the death of Sa’u Justina Sa’u. Kolani Junior Lam was Justina’s husband and has pleaded not guilty. Lam maintains his innocence claiming he had found the mother of two of his children after she’d committed suicide.

He pointed out several additional injuries found under the skin surface of the neck, and on the alleged victim’s arms and legs. He also spoke of blood clotting evident in the eyes which is caused by sudden blockage of the airway and blood circulation to the head.

It was Dr Boterill’s evidence that in all his years of assessing cases of suicide, this is the most number of “additional injuries” he has seen on a body.

He also concluded that some of the brusing on Justina’s arms and legs were caused by hitting furniture or edges of such hard objects, at least one or two days before death.

“These injuries could not have occurred from a simple application of force or by hanging alone and it is impossible to have these bruises just by hanging”, said the pathologist who flew in from Cairns to give evidence.

Dr Boterill described blood clots found in the eyes and under the eyelids as petechiae formed from capillaries breaking open. He says these are caused when blood stops flowing from the head to the rest of the body. It is the opinion of the pathologist that if the blockage of blood flow is constant, as caused by hanging, then there would be few petechiae. However if the blood flow is blocked and opened up again as consistent with strangulation where the victim is gasping for air and fighting back, this may lead to the many signs of blood clots or petechiae found.

During cross examination defence counsel Leiataualesa ask Dr. Botterill if it were possible that some of the bruises described could have been caused by resuscitation from performing CPR or even sustained after death.

Dr. Botterill said yes, these were possibilities however he added that would not account for the multiple bruises that found on the deceased.

“In some cases that could happen where bruises were visible while the deceased was lying on the back or facing down,” he said.

“However, in this case, the bruises sustained by the deceased were most likely have occurred before death.”

The Court continues into the second week of the hearing before Justice Mata Tuatagaloa.