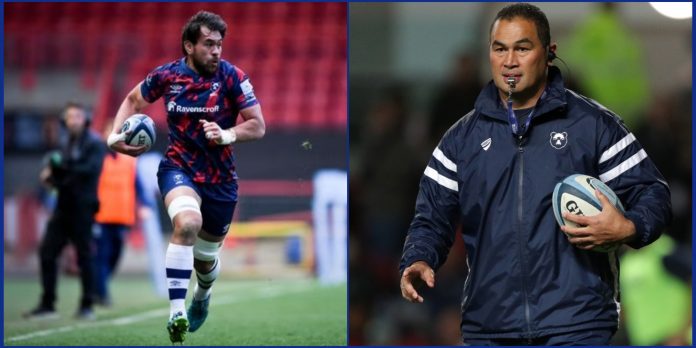 Former All Black Steven Luatua will not feature in upcoming the Manu Samoa Northern Hemisphere tour despite getting called up by Manu Samoa 15s head coach Vaovasamanaia Seilala Mapusua.

Bristol Bears director of rugby and former Manu Samoa captain Pat Lam has confirmed the flanker’s calf injury susustained during a pre-season training will regrettably prevent him from making his debut for Samoa in November.

According to Lam, the injury recovery plan for the 15-capped All Black has Luatua returning in the last week of November/first week of December.

The announcement of the Manu Samoa squad by Lakapi Samoa Chairman, Hon Tuilaepa Dr Sailele Malielegaoi saw the inclusion of several players who have become eligible for their Tier 2 country of heritage since the long overdue changes to World Rugby eligibility rules came into force in January.

Players who had been locked into one nation for life are now able to switch allegiance if they have served a three-year stand down.

In June, Bristol full-back Charlies Piutau, also a former All Black, made his Tonga debut as one of the first big name stars to play for two international countries since the rule change.

Auckland-born Luatua, 31, played the last of his 15 caps for New Zealand back in November 2016 when he ran out against Italy. Since making thr move to Bristol, Luatua has been a long-term target for the Samoa head coach.

The excitement of his debut for Samoa has been dampened by former Manu Samoa captain now Head Coach for Bristol, Pat Lam, saying the players’ recovery is the focus at the moment.

“He is no good to anyone, Samoa or ourselves, if he is not back on the field so his priority is his rehab and his programme which he has been doing every day diligently, that doesn’t change.”

Speaking to BristolLive, Pat Lam said it is awesome for Samoa to have someone of Luatua’s experience and leadership, especially as the Manu Samoa head towards the World Cup.

“..but unfortunately Stevie won’t be available for the Autumn internationals because he is not due back until the end of November, December, that is his injury timeline..”

“It is great for Samoa rugby that he is considered in there. He will be available to them when he gets fit but it is going to be after the November series and then he will be back for the Bears and hopefully will stay injury free and be available to play for Samoa at the World Cup.”