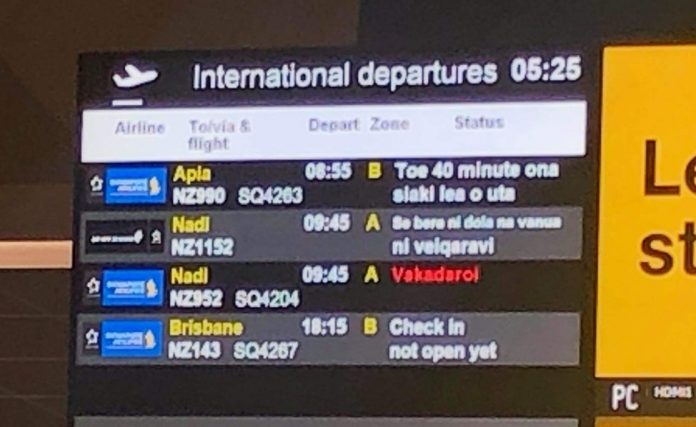 Passengers arrived hours before Samoa’s first repatriation flight from Auckland where 150 eager to return home citizens have been confirmed seats in Air New Zealand’s NZ990 departing at 8.55am this morning.

Auckland airport is empty with only 2 other flights scheduled today – a flight to Nadi this morning and a flight to Brisbane in the afternoon.

Strict travel conditions have been imposed with all passengers requiring to present a negative COVID-19 test, not more than 3 days old as well as a medical clearance to travel – issued by a Medical Clinic or General Practitioner.

In addition, passengers lining up also report that they are all undergoing further tests at Auckland airport before full clearance is given.

Not all passengers planning to return have been able to board. Some intending travellers who did have medical clearance but did not present COVID-19 tests have been turned away.

Samoa’s State of Emergency Orders as well as notifications from airlines confirmed travel conditions as 1) a medical clearance and 2) a covid-19 test issued not more than 3 days prior to departure date. 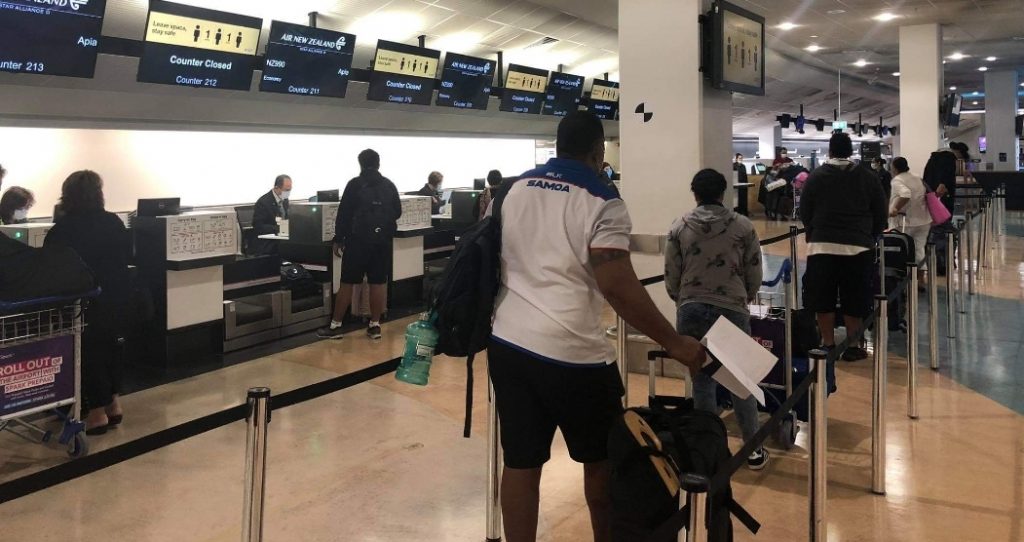 The Ministry of Health CEO has confirmed the plan to accomodate passengers in groups of 10, across 15 hotels which will all be isolated from the public.

Leausa Dr Take Naseri says there will be 15 different medical teams assigned to each isolation area, and the Ministry have held several sessions with hotel management and staff on the precautionary measures to be taken.

“Each isolation area or hotel will have its own specially assigned medical team. That is to ensure our doctors and nurses do not come into contact with more than one group;

“We also plan to group them with those they sat with on board the plane”.

Leausa says Samoa is taking no chances with all the precautions being taken, despite the fact that New Zealand have no more COVID-19 patients in hospitals, and have not recorded any new cases in 5 days.

“With New Zealand’s situation now well under control, we feel the chances of our returning citizens being infected while in NZ is minimal, however, the Ministry will be treating their isolation with the highest level of caution and taking all steps to ensure Samoa remains safe.”

The Head of Samoa’s National Emergency Operations Centre (NEOC) Ulu Bismarck Crawley on the other hand, has come out to say he believes passengers should pay for their own accomodation as their contribution to Samoa’s efforts. This is despite the millions being poured in from development partners around the globe to help Samoa meet costs of unprecedented times brought about by the pandemic.

The Prime Minister of Samoa Tuilaepa Dr Sailele Malielegaoi told the media that there are close to 900 Samoans who have registered their interest to come home from New Zealand alone. That is not counting sailors contracted for employment abroad, and citizens across the globe including Australia and other parts of the Pacific, as well as the United States of America and Europe.

The Air New Zealand repatriation flight is due to arrive at Faleolo International Airport at 2pm this afternoon.