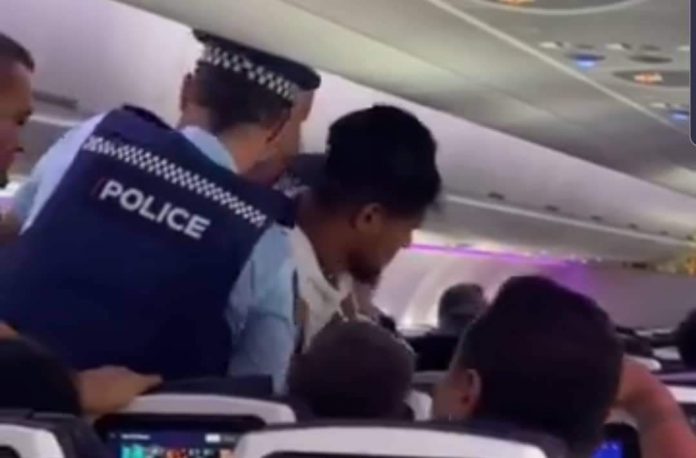 Air New Zealand flight 958 from Auckland to Apia was delayed for an hour while police arrested and removed an intoxicated passenger from the plane.

Yelling at the top of his voice, the male passenger is captured on video swearing and causing disorder as passengers boarded and flight crew prepared for take-off.

The man turned to the passengers behind him and declared Samoa as his nation, referring to Samoa being tattooed on his left arm.

“I love you all! As you can see my tattoo right here? That’s what we call it, the tatau! This is Samoan! Samoan!,” he yelled as he turned to the row behind him to show them his tatoo.

“Samoan is the heart of the South Pacific! Whatever happens, it defends and Samoa is gonna defend you guys! No matter what race you come from, Samoa will be always there for you! You guys hear that!? Samoa!,”

A passenger in row 9 said the New Zealand police were called to remove the man who looked to be in his 40s, after efforts to calm him down were unsuccessful.

“The Director General of the South Pacific Regional Environmental Program (SPREP) Namulauulu Kosi Latu and other male passengers tried to speak to the man but it didn’t help”.

“He looked too drunk and just kept swearing and bothering other passengers.”

“Thankfully this happened on the ground before take-off.”

Deputy Prime Minister Fiame Naomi Mataafa was on board the flight as well as Manu Samoa Sevens player Laaloi Leilua returning from Dubai to be with his newborn baby who had contracted measles.

The Air New Zealand flight due to arrive at 8.45pm landed safely after 10pm.