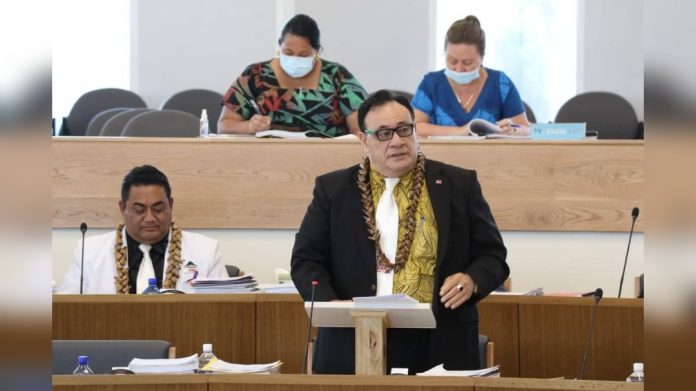 After several hours of deliberation, Samoa’s Legislative Assembly upheld the reccomendation by its Privileges and Ethics Committee to suspend Samoa’s longest serving Prime Minister, Hon Tuilaepa Dr Sailele Maliegaoi and HRPP party secretary, Hon Lealailepule Rimoni Aiafi. The Committee recommended that Tuilaepa and Lealailepule be suspended without pay, and for an indefinite period of time, with their return to be decided by Parliament.

The findings of the Privileges and Ethics Committee were tabled in Parliament by Committee Chairman Hon Valasi Luapitofanua To’ogamaga Tafito, who said they had found the opposition MPs in contempt of Parliament, and in  breach of parliamentary privileges.

The Speaker of the House, Hon Papalii Lio Taeu Masipau had last month announced he had received a formal letter of complaint against Tuilaepa and Lealailepule, filed by Deputy Prime Minister Hon Tuala Tevaga Ponifasio. The complaint was based on a recent Supreme Court decision where both Tuilaepa and Lealailepule had been found guilty of Contempt of Court for public remarks made during the 2021 political crisis.

The Supreme Court had relied heavily on a signed Harmony Agreement between the leaders of Samoa’s two main political parties, as a basis to release Tuilaepa and Lealailepule from any penalties in relation to the charges.

Parliament passed the motion to uphold the recommendation of the Privileges and Ethics Committee after six hours of deliberations where MPs from the HRPP spoke about the need to move forward in the spirit of forgiveness. Lealailepule Rimoni Aiafi asked Parliament to consider Tuilaepa’s service to Samoa as an MP and longest serving Prime Minister.

Newly sworn-in woman MP Aliimalemanu Alofa Tuuau pleaded with the Prime Minister to consider the woman’s cultural role of being the mediator who irons out issues that arise within a family or community.

However Prime Minister Hon Fiame Naomi Mataafa said the issue was the protection of the integrity of Parliament and said this was an important lesson or all MPs about the impacts of Contempt of Parliament.

Tuilaepa was not in Parliament during the deliberations on Tuesday, and the opposition leader Hon Fonotoe Luafesili Pierre Lauofo, requested the matter be adjourned until Tuilaepa could be present.

Also Chair of Samoa’s Rugby Union, Tuilaepa Saiele is currently in quarantine having just returned into Samoa from attending a World Rugby board meeting in Ireland.

Tuala Tevaga Ponifasio was also not in Parliament, having been tested positive for Covid-19.

Valasi told Parliament the committee had received and considered the written responses by Tuilaepa and Lealailepule. He added that the Committee had also held a 3-hour zoom session with the HRPP Leader to hear his side of the arguments.

Speaking to the media last month, Tuilaepa and Lealailepule expressed disappointment that spirit of the Harmony Agreement was not considered by the Deputy Prime Minister.

Tuilaepa had dismissed the allegations and complaint against them as frivolous and without basis.

In response, Lealailepule has filed his own letter of complaint against Tuala, alleging misconduct by the DPM for not resigning from various companies for which Tuala was a registered director and shareholder. The counter complaint which had been received by the Speaker, also refers to a Samoa Law Society investigation of the DPM back in 2015.

The suspension of Samoa’s former and longest serving Prime Minister comes at a time when the Annual Budget is expected to be tabled next week Tuesday.

Deputy Leader of the HRPP said in all of his years as a Member of Samoa’s Parliament, he had never known such a decision to be taken by the Legislative Assembly and for him, said Fonotoe, it was the saddest day he’d experienced in Parliament.