The Head of State of Samoa HH Tuimalealiifano Va’aleto’a Sualauvi II has finally issued a proclamation for the official opening of the XVIIth Parliament of Samoa.

The proclamation comes exactly six weeks after the April 9th General Elections, calling the official opening of the XVIIth Parliament of Samoa on Monday 24th May 2021, at 9:30am.

The Parliament of Samoa finally convenes following a series of events including Court judgement that ruled against an attempt to have an additional Member of Parliament, and another attempt to return the country to the polls for fresh elections. 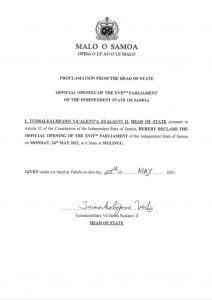 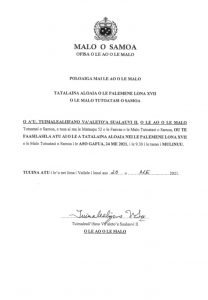 In the handing down its judgement to declaring the Head of State did not have powers to call fresh elections, the Supreme Court of Samoa directed His Highness to the requirements of the Article 52 of Samoa’s Constitution for the Head of State to call a meeting of the Legislative Assembly “within 45 days of the holding of a General Election”.  Cutting it fine, Samoa’s Parliament is now set to convene on the 45th day.

The XVIIth Parliament convenes with the newly established Faatuatua i Le Atua Samoa ua Tasi (FAST) party having 26 of the 51 seats, which would inevitably bring the 40 years of Human Rights Protection Party rule over Samoa to an end and see Samoa elect its first woman Prime Minister in Hon Fiame Naomi Mataafa.

The Speaker of the House is the first order of business, and it is rumoured to be former Tuatua Samoa-turned-FAST MP for Faasaleleaga No3, also a former Assistant Commissioner of Poice and lawyer by profession, Papalii Lio Oloipola Taeu Masepa’u.