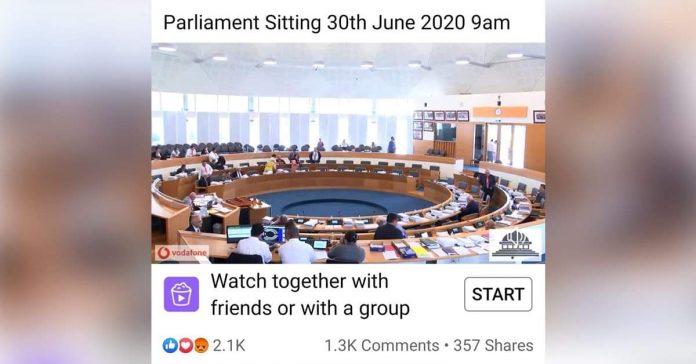 The Clerk of the Legislative Assembly has today announced the ceasing of their popular facebook live feeds of Parliamentary proceedings, in an effort to “stop and dampen unpleasant and discourteous comments towards Members of Parliament..”

In a press statement issued last night it is asserted that abusive comments towards MPs during live Facebook feeds “exemplifies a  breach of respect towards leaders of our country”.

Parliament proceedings would now instead be viewed via YouTube where members of the public are unable to leave a comment.

The last Facebook live of Parliamentary proceedings was on the 30th of June 2020. A scroll through public comments on that day displays a disturbing number of abusive comments and profanity aimed at MPs by individuals. Some comments are made by people using their own identities, while others are made by unknown fake pages.

It is unclear why public comments that defame MPs and those that contain swear words have not yet been deleted. It is also unclear if action would be taken against those who can be identified through their fb pages.

The Legislative Assembly Office says the purpose of its live feed is to allow Samoan citizens on island and across the globe, to access Parliament proceedings.

“However due to receiving numerous spiteful comments made towards Members of Parliament on Facebook, it is our duty to protect the integrity of Parliament and Members thus  the new initiative to install its live feed with YouTube”, the statement reads.

The Clerk added that YouTube is secure and the best way forward for Samoa and the Office to continue its service.

In October last year the District Court convicted and sentenced King Faipopo aka Malele Paulo to 7 weeks imprisonment for “making false statements on social media that affects the reputation of a person”.

The Samoa Police Service had issued a statement to warn against cyberbullying at the time.

“Where complaints are laid with the police, we will do our best to assist those being victimised on social media platforms by any false statements”.