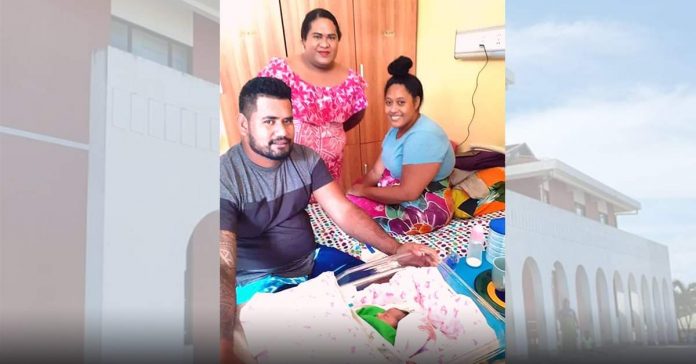 The parents of Samoa’s 2021 New Year baby have expressed their heartfelt gratitude to doctors and nurses of Motootua National Hospital for saving their baby girl.

Sose Blessing Visesio was born at 2.35am on the 1st of January 2021 to parents Koreta Keti of Fusi, and Visesio Roma from Puapua Savaii.

Visesio and Koreta arrived at Motootua National Hospital just after 1am to find their baby’s heartrate was slowing; requiring on-duty midwives, paeds doctors and NICU nurses to take decisive action that morning to save her.

“We want to thank our on-duty midwives RM Tuulua and RM Pomaniana.. We also want to thank Doctor Tito Kamu, the pediatric doctor who was there that night to treat baby after delivery and then also to Dr Tapa Fidow, and all the nurses here at the NICU and maternity ward”, said the grateful parents.

RN Tiara Tuulua said they acted immediately when baby’s heartrate was discovered to be too slow.

“At the same time, Mom’s labour pains were very mild,” explains RN Tuulua, who had also delivered Samoa’s 2020 first baby of the decade.

Under pressure to make the right decision and save baby, Registered Midwives, RM Tiara Tuulua and RM Lea Pomaniana, with the support of on-call doctors, set to work to save Samoa’s New Year baby.

Dad Visesio Roma recalls his wife had not wanted to come into the hospital too soon that night, and because her contractions were mild, she and their sister-in-law kept telling him to relax, “e lei kaikai”. However, he says he is thankful to God, for a still small voice that kept nagging him to take his wife to the hospital.

“The midwives explained the situation to us, and kept us informed during the delivery..

“We could hear our baby’s heart rate was very slow.. we felt helpless, but we put our faith in God and in the hands of the two midwives who were there that night,” he added.

RM Tuulua now Acting Manager of the Maternity Ward, with over 13 years experience including several with the Neonatal Intensive Care Unit (NICU) was assisted that night by RM Pomaniana.

“We showed and explained everything to both parents and grandma who was there with them to make sure they were well informed..

RM Tuulua said they then performed a normal delivery, however, Samoa’s New Year baby needed to be resuscitated.

“We had everything prepared to resuscitate baby..

“She responded after about a minute and a half of our resuscitation..we continued until she was referred to the NICU for close observation and treatment..

“Dr Tito Kamu our peads doctor was very helpful; he was right there to start treatments after delivery.. and Dr Tapa Fidow was very busy with other critical patients that night, but always came in to check on us to make sure we were following the process, and to check on the Mom,” added RM Tuulua.

The midwives delivered two more babies that night, and in the morning when their shift ended, they were glad to find Samoa’s New Year baby fully recovered, being monitored at NICU.

Today, the maternity ward nurses confirm that baby Sose Blessing Visesio “has completed her prophylaxis treatment, no more oxygen needed, she is feeding well, and hope to be discharged later this week”.

Proud father Visesio Roma says they can’t wait to be discharged and return to Savaii where their parents and family are waiting to meet their special Princess of the 2021 New Year.

“We thank God for this gift, our firstborn child and Samoa’s first 2021 baby;

“But we want to say thank you to all the doctors and nurses here at Motootua hospital, for saving our baby girl;

“We knew there were complications but we also saw how calm they all were, and Tiara kept explaining things to us, so we never panicked”.