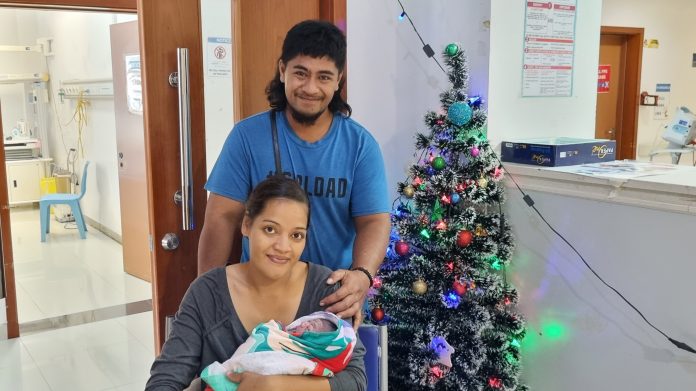 Parents of the first baby born in 2023 at the Tupua Tamasese Meaole National Hospital at Motootua have named her Princess New Year Palepa Hunt.

Liz and Eric Paee Hunt have named their baby girl Princess New Year with Palepa being the favourite aunty who took Liz to the hospital when her contractions got close.

“She’s my Mom’s younger sister,” said Liz, “and yes, a favorite aunty who always supports us.”

“She and her husband drove us to the hospital, so she was there when Princess New Year was born.”

“So we decided on Princess New Year Palepa.”

Princess was born at 0516 hours at Motootua National Hospital.

She is Samoa’s second baby of 2023, with the first being a baby girl born at Tuasivi Hospital at 0500 hours on Sunday morning.

RM Jessie Autagavaia and RM Siaulaula of the Tupua Tamasese Meaole Hospital’s Labour Unit were on duty on New Year’s eve, and say they are blessed to have delivered the first Upolu baby of 2023.

“It was an easy birth,” said RM Jessie. “Just 20 minutes after they arrived.”

Princess New Year Palepa is the third child of Liz and Eric Hunt of Aleisa. They have two other daughters; four year old Aitu and two year old Thelma who their parents say are thrilled to have a baby sister.