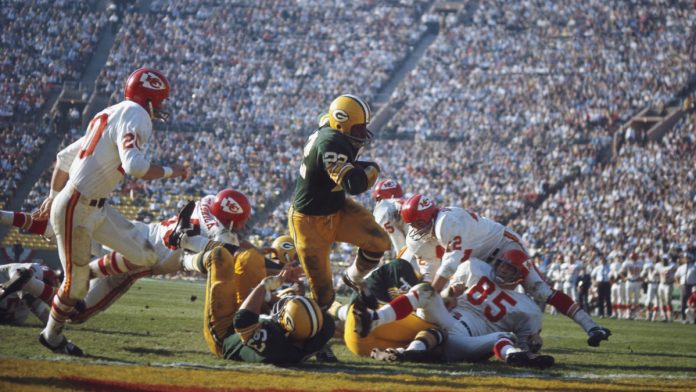 On this day in 1967, at the Los Angeles Coliseum, the Green Bay Packers beat the Kansas City Chiefs in the first-ever world championship game of American football.

In the mid-1960s, the intense competition for players and fans between the National Football League (NFL) and the upstart American Football League (AFL) led to talks of a possible merger. It was decided that the winners of each league’s championship would meet each year in a single game to determine the “world champion of football.”

In that historic first game–played before a non-sell-out crowd of 61,946 people–Green Bay scored three touchdowns in the second half to defeat Kansas City 35-10. Led by MVP quarterback Bart Starr, the Packers benefited from Max McGee’s stellar receiving and a key interception by safety Willie Wood. For their win, each member of the Packers collected $15,000: the largest single-game share in the history of team sports.

Postseason college games were known as “bowl” games, and AFL founder Lamar Hunt suggested that the new pro championship be called the “Super Bowl.” The term was officially introduced in 1969, along with roman numerals to designate the individual games. In 1970, the NFL and AFL merged into one league with two conferences, each with 13 teams. Since then, the Super Bowl has been a face-off between the winners of the American Football Conference (AFC) and the National Football Conference (NFC) for the NFL championship and the coveted Vince Lombardi Trophy, named for the legendary Packers coach who guided his team to victory in the first two Super Bowls.

Super Bowl Sunday has become an unofficial American holiday, complete with parties, betting pools and excessive consumption of food and drink. On average, 80 to 90 million people are tuned into the game on TV at any given moment, while some 130-140 million watch at least some part of the game. The commercials shown during the game have become an attraction in themselves, with TV networks charging as much as $2.5 million for a 30-second spot and companies making more expensive, high-concept ads each year. The game itself has more than once been upstaged by its elaborate pre-game or halftime entertainment, most recently in 2004 when Janet Jackson’s infamous “wardrobe malfunction” resulted in a $225,000 fine for the TV network airing the game, CBS, and tighter controls on televised indecency.