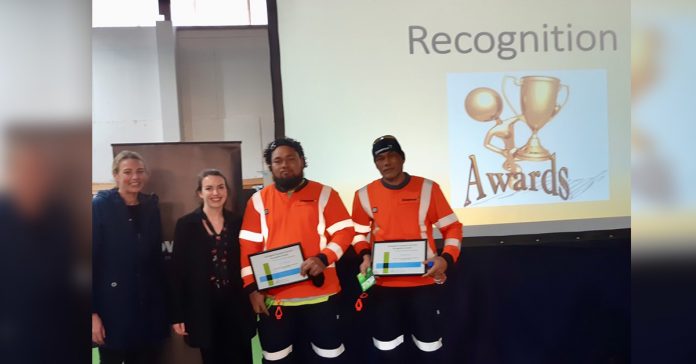 Two Samoan workers participating in the Pacific Trades Partnership (PTP) were awarded Certificates of Recognition by their employer last week at their annual regional meeting ‘State of the Nations’ award ceremony.

Downer Group is a construction company that employs more than 53,000 people across more than 300 sites, primarily in Australia and New Zealand but also in the Asia-Pacific region, South America and Southern Africa.

Fou Salevao of Gagaifolevao Lefaga and Iosefo Lino of Vaiusu were nominated by their supervisor for their strong work ethic, positive attitude, and ability to go the extra mile. As their supervisor Fale stated “Everyone loves the work effort both men bring as they have helped out in other areas in our business. They are always wanted by other foremen for Saturday work which both men happily help out with.”

The awarding of the Certificates not only serves as a testament of the calibre of the two workers but also sets the benchmark for potential workers from Samoa determined to join the scheme. Both Fou and Iosefo, who have been in New Zealand since March 2019, are based in the Wellington region.

The PTP initiative is primarily aimed at recruitment and selection of skilled trade workers from the Pacific and builds on the success of the Canterbury Rebuild Employment Pilot (2015-2016). It is one of two NZ-based labour mobility schemes which exemplify the on-going close partnership between the Government of New Zealand and the Government of Samoa.