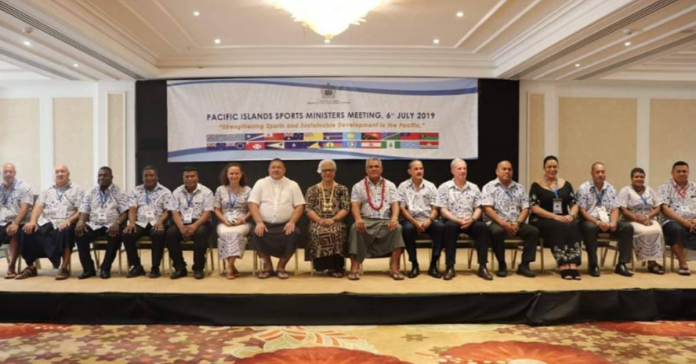 7 July 2019, Apia – Sports Ministers from the Pacific agreed to adopt a coordinated approach to action for sport development in the Pacific recognising the crucial role of sports in achieving sustainable development goals.

Sports Ministers and their representatives from across the Pacific including New Zeakand and Australia met at the Sheraton Samoa Aggie Grey’s Hotel and Bungalows in Apia yesterday.

“Sport brings a new dimension to regional cooperation for the development of Pacific Island Countries and an opportunity to explore new partnership models that engage government via a multi-sectoral approach across sport, health, education, gender, disability, foreign affairs, tourism, trade and economics.”

The Minister of Education, Sport and Culture of Samoa, Hon. Loau Solamalemalo Keneti Sio chaired the meeting themed, ‘Strengthening Sport and Sustainable Development in the Pacific’.

Leaders agreed to adopt a shared vision and take a coordinated action for sport in the Pacific; and to also focus on strengthening sports performance in the Pacific

The Sports Ministers endorsed the Ministerial Outcome Statement highlighting some of the key issues discussed and considered for further development of Sport in the Blue Pacific.

The valuable contribution of sport in the social, cultural and economic life of people of the Blue Pacific Continent was emphasised and the Ministers also strongly advocated for continued investments in the Pacific’s greatest resource “our people”.

The Sports Ministers congratulated Samoa for all the preparations and wished them well for the 2019 Pacific Games which will officially open on Sunday, 7 July 2019. As confirmed by the Deputy Prime Minister to the meeting – “Samoa and all our people are ready to welcome our Blue Pacific family to the 16th Pacific Games with its apt theme ‘One in Spirit’.”