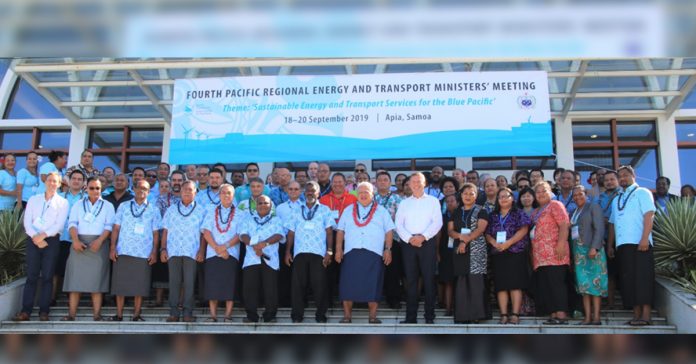 Apia, Samoa – Pacific Energy and Transport Ministers have committed to a bold set of priorities to reduce the region’s reliance on fossil fuels whilst supporting sustainable energy and maritime transport services over the next decade and beyond.

Currently 75% of fossil fuels imported into the region are used for land and maritime transport and the priorities endorsed today will support the reduction of fossil fuels in transportation over the next decade.  In addition, the region will work to increase access to electricity for the 64% of the region’s population who are still without regular power supply.

In his official address to the Energy and Transport Ministers’, the Prime Minister of the Independent State of Samoa, Honourable Tuilaepa Dr. Sailele Aiono  commended the outcomes and direction agreed towards “resilient development whilst embracing low-carbon development and reducing greenhouse gas emissions from the region by embracing a phase out of fossil fuels,” he said.

The Director-General of the Pacific Community (SPC), Dr Colin Tukuitonga, echoed Prime Minister Malielegaoi’s statement, “I commend the countries for the bold commitment towards a more resilient future for our region. We know climate smart decisions are financially smart so fitting boats with solar panels to run energy systems are already examples of what’s working here in our region to reduce our reliance on fossil fuel”.

“As the world moves away from fossil fuels, the cost for the Pacific will increase so ensuring sustainable and renewable forms of energy and transport is critical for our Blue Pacific and the future of our people,” he said.

The Transport ministers agreed that sustainable maritime services requires a community-based approach to safety-for-all at sea in the Pacific region. Ministers, directed ship operators to seriously prioritise safety issues and at the same time, agreed to work towards ambitious targets to reduce reliance on fossil fuels and greenhouse emissions from Pacific islands domestic shipping and adopted a vision for Pacific Ports 2030-2050.

In a separate discussion Energy Ministers reaffirmed climate change as the single greatest threat to the livelihoods, security and wellbeing of the peoples of the Pacific and their commitment to progress the implementation of the Paris Agreement and their vision for a 100% renewable energy generation in the Pacific Islands region, and called for closer coordination and alignment of regional efforts on sustainable energy by SPC in collaboration with other development partners.

For the 32 detailed outcomes please see the statement here: http://www.spc.int/DigitalLibrary/Get/n9mdr

The next Pacific Regional Energy and Transport Ministers’ Meeting will be held in Vanuatu in 2022. This meeting was hosted by the Samoa Government in partnership with the SPC.