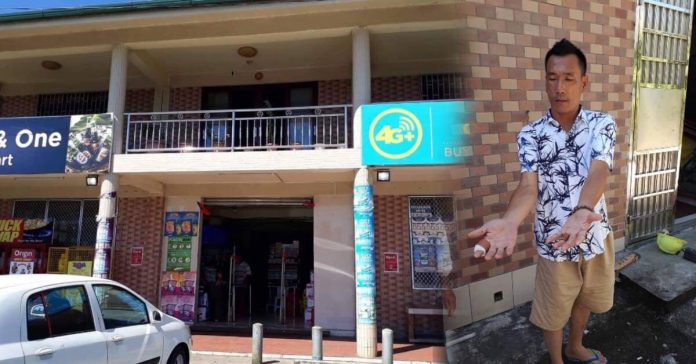 23 February, 2019 Samoa – Owners of the One & One Shop at Vailoa are living in fear for their safety after the two escaped prisoners armed with machetes broke into their store and stole $60,000 tala.

Business owner Ming Sheng said two men now confirmed to be notorious escaped prisoners Chong Nee and Aniseko Vaelei, came through the back where their kitchen is, and got inside their home through the window.

Ming Sheng Cheng and his older brother Ming Wei Cheng said they fear for the lives of their families and their elderly mother.

In tears, Ming Wei who has been living in Samoa for the past 25 years said that his family now plan to close down their businesses here in Samoa and move back to China because they are no longer safe here.

He said, stealing from them is one thing but attacking his family with a machete is another.

Ask about the money, Ming Wei shared his disappointment when speaking about the cash that the two suspects took with them.

“It’s a large amount of money, not sure how much it is but that money is for our two containers that are sitting at the wharf,” he said.

“Now we don’t know what to do with the containers because we don’t have any money to clear it from the wharf.”

Yesterday, the Ministry of Police issued a statement informing the public that one of the escaped prisoners Aniseko Vaileihave been captured.

The statement stated that $10,000 was recovered from Vaileiand that they are looking for Pati Chong Nee.

The police also confirmed the two escaped prisoners are responsible for the robbery of The Vailoa One & One Shop.