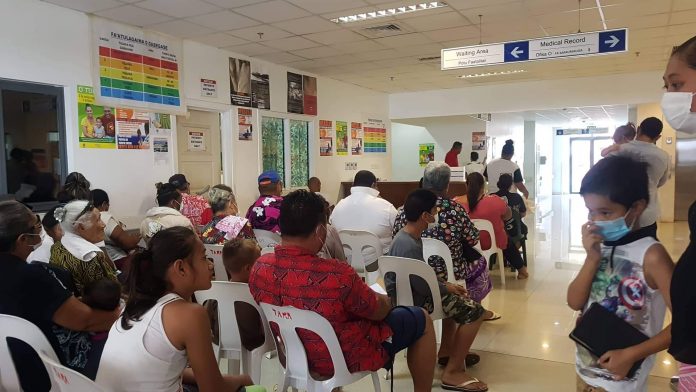 The latest Update Report issued 1.40pm today confirms that 65,828 people have been vaccinated since the measles outbreak which has now claimed 33 lives in Samoa, one fatality in the past 24 hours.

Report Update No11 issued this afternoon states that, “A total of 32,743 vaccinations were completed before the Mass Vaccination Campaign”.

The breakdown of that 32 thousand is recorded as:

In additoon to that number, “since the activation of the Mass Vaccination Campaign on 20 November 2019, the Ministry has successfully vaccinated 33,085 individuals in both Upolu and Savaii”.

A Mass Vaccination Campaign for measles was handed down as an Order of the State of Emergency declared 15 November 2019, requiring all parents to vaccinate their children and all adults to receive ‘booster shots’ for measles.

Before the Order for Mass Vaccination was handed down, doctors and medical professionals  predicted that 75,000 children needed to be vaccinated in Samoa and that coverage for Samoa could be as low as 10%.

According to UNICEF, coverage rates dropped to 40 percent and 28 percent for the two-dose vaccine, far lower than the 95% needed to contain the spread od measles. Vaccine scepticism in Samoa worsened last year when two infants died after receiving vaccines that were mistakenly mixed with an anaesthetic.

The team at at the Matagialalua Clinic in Apia confirmed that they had administered over 800 vaccinations today alone.

Most of those are completed in the morning with the clinic failry empty when Samoa Global News visited around 2pm today.

Asked a conference with the media today, the Director General of Health Leausa Dr Take Naseri  said the Mass Vaccination Campaign may open to women over the age of 35 and all men over 19 years next week.

The latest report shows 13 deaths are babies less than a year old, 16 are between the ages of 1-4, 3 are teenagers and one 37 year old who was reported to have had other health complications.

Parents are urged to seek medical advice early, as soon as these are symptoms such as fever, rash, and for babies under 12 months, signs such as difficulty breathing and not taking food.

Children and youth under 19 have been banned from public gatherings and pregnant women are no longer allowed in workplaces as Samoa continues the battle to contain the epidemic.

REPORT NO.11 IN VERBATIM:

The Ministry of Health confirms a total of 2,686 measles cases have been reported to the Disease Surveillance Team, since the outbreak started. There were 249 recorded in the last 24 hours.

To date, 33 measles related deaths have been recorded, with one fatality in the last 24 hours.

The total number of measles cases admitted to all hospitals recorded for the outbreak to date is 798. Of that, 572 patients have been discharged.

Since the activation of the Mass Vaccination Campaign on 20 November 2019, the Ministry has successfully vaccinated 33,085 individuals in both Upolu and Savaii.