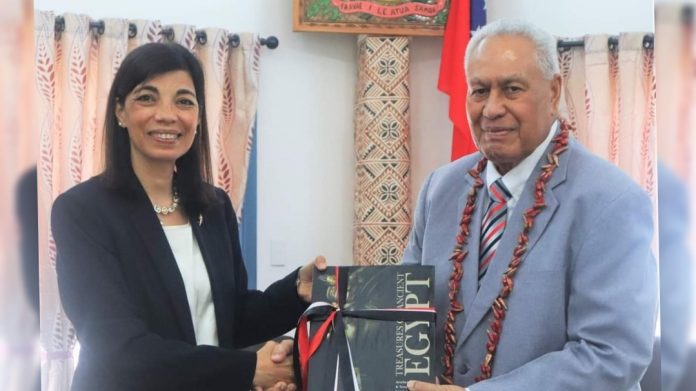 H.E. Mrs. Dina Farouk el Sehy, the new Ambassador Extraordinary and Plenipotentiary of the Arab Republic of Egypt to Samoa presented her Letter of Credence to the Head of State, Afioga Tuimalealiifano Vaaletoa Sualauvi II, during a ceremony held at the Residence of the Head of State at Vailele this afternoon.

Samoa and Egypt established diplomatic relations on 08 September 1978, over 44 years ago.

Both remarks by the Head of State and the Ambassador reaffirmed Samoa and Egypt’s continued collaboration at the United Nations and multilateral fora to promote mutual interests in maintaining world peace and security and in achieving the global sustainable development agenda.

H.E. Dina Farouk el Sehy expressed that Egypt’s hosting of the UN Climate Change Conference, COP27 which started this week, confirms its commitment to addressing the issue of climate change which is an existential threat to Samoa, the Pacific region and small islands developing states.

H.E. Mrs. Dina Farouk el Sehy is the first Ambassador to present letters of credence in person to the Head of State since the lockdown of Samoa’s international borders due to the global COVID-19 pandemic in March 2020.

Ambassador Farouk el Sehy has 30 years of experience in the Egyptian Ministry of Foreign Affairs and has held various senior positions in the ministry.

On diplomatic postings, Ambassador Farouk el Sehy was the Diplomatic Attachě Department of Sudanese Affairs from 1991-1992, she also served as Minister Plenipotentiary at the Embassy of Egypt in New Delhi, India (2007-2011), as Counsellor at the Embassy of Egypt in Prague (2002-2006), Vice Consul at the Egyptian Consulate General in Paris, France (1995-1995) and Third Secretary African Department (1993-1995).

She is accredited to Samoa with residence in Wellington, New Zealand.