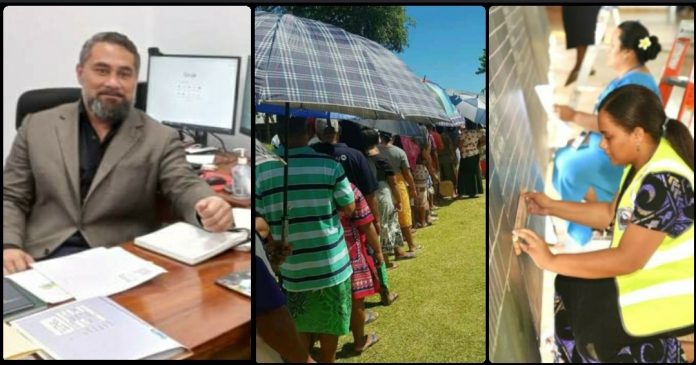 Translated from #FaaSamoa. There are 16,862 registered voters in the seven electoral constituencies that will be returning to the polls for the upcoming by-elections.

The Speaker of Samoa’s Parliament Hon Papalii Li’o Oloipola Ta’eu Masipa’u has not yet indicated a date for by-elections, however, this has not stopped the Office of the Electoral Commissioner (OEC) from forging ahead with preparations.

“We have yet to receive official notice from the Speaker, however, preparations are well underway here at OEC..” said Faimalomatumua Mathew Lemisio in an interview with SGN.

“The Office will carry out its role to inform the public once a decree has been set down by the Speaker,” said Faimalomatumua.

Samoa’s electoral roll closed at 128,848 for the 9 April 2021 general election earlier this year. The seven constituencies returning to the polls makes up 13.1% of total voters in Samoa.

The Electoral Commissioner confirmed that of the 16,862 voters 1,103 are eligible for pre-polling, to be conducted on one of the days leading up to the by-election.

The leader of the Human Rights Protection Party (HRPP) has issued a statement alleging there is a sinister reason behind the delay in calling by-elections.

“There are devious schemes at play here and it is disconcerting,” said the opposition leader who adds that HRPP are willing to take the matter to Court if a by-election date is not forthcoming.

“All the Speaker has to do is set a date so the Office of the Electoral Commission can set everything in motion to run the by-elections”, said Samoa’s former Prime Minister.

During the interview on OEC’s preparations, the Electoral Commissioner said there are few changes to expect in the upcoming by-elections and many of those have been well publicised through the media following recent amendments to the Electoral Act.

Faimalomatumua, however, once again warns the voting public and potential candidates about incidents of bribery and treating in the lead up to elections in Samoa.

Himself a lawyer, the Commissioner says the Law is clear on bribery which covers the offering of monetary gifts, food or favours to voters by the candidate, or a member of the candidate’s committee.

There were 28 post-election petitions and counter-petitions alleging bribery by candidates filed in the Supreme Court of Samoa following the 9 April general election. Witness accounts during court hearings gave evidence of a culture where voters would seek out candidates to ask for money.

One voter unashamedly told the Court he had been drinking [alcohol] on Friday night, and when he woke up on Saturday morning, he wanted to drink some more.

“So my close friend who owns a car said we should go and look for a candidate (sui tauva). We didn’t know him but we knew where he lived..”

In earlier interviews with SGN, Faimalomatumua continues to advocate for the need to change existing norms cemented by deeply rooted mindsets and behaviours around elections in Samoa.

One reform impemented for the first time in 2021 saw the removal of plates of food provided by candidates on election day. For years, candidate committees prepared food that was given out to voters after they cast their ballots.

Other changes have not been easy to push through such as the law prohibiting candidates or their committees to transport voters to and from booths. This was observed to have been openly ignored by many committees during the April 9 general election.

There are 7 upcoming by-elections for Samoa:

2) Sagaga 4:  HRPPs Tuisa Tuimasealii Tasi Patea did win this seat, however, he was forced to resign as a term of withdrawal of the FAST case against him.

4) Falealupo: Leota Aeau Tima Leavai won the general election but has resigned from her seat also as a condition of withdrawal of a petition from the FAST candidate against her.

6) Aana Alofi 2: Aiono Afaese Toleafoa lost his seat through a court petition against him by a FAST candidate.