The biggest drug bust in Samoa led to the discovery of an estimated $10 million tala (US$4 million) worth of marijuana plants.

Over 10,000 marijuana plants were collected from 6 different plantations deep into the notorious Faleatiu hill area in a drug bust that led to the arrest of 11 people.

The value comes from a costing of each plant to be an estimated ST$1,000 tala each, which some say is way too conservative an estimation.

Su’a himself led the operation that involved 80 police officers last Friday in the same area of Faleatiu they had raided in 2015 and 2016.

“We were way in the deep woods of Faleatiu. We couldn’t bring everything ourselves from the mountain so we had to send in reinforcements”.

“It was six different plantations.”

Sua told the media last Friday that the operation involved years of the SPS Criminal Investigation Division working together with the INTEL Unit to analyse and collect information. He named the use of a drone and collaborative efforts with other key agencies as key success factors for this operation.

“One of the things that worked well this time was the use of a drone.”

“There was no way we could have gotten this much without the use of the drone because it is very thick brush up there and by sending the drone up we could really see the whole landscape.”

SPS says this is the largest drug bust recorded and acknowledged the support of the Australian Federal Police, Fire and Emergency Service Authority and the community of Faleatiu village.

An SPS statement further acknowledges “the courageous members of the community who are reporting these matters to SPS”.

The Police Commissioner told the media last Friday that they could not sit idle when they were receiving a lot of complaints about marijuana in this Faleatiu area, and reports that marijuana sellers are harassing the public as well as tourists at the Fugalei market.

Su’a added that there is a lot of illegal activity up in this area and they were lucky to have not lost any lives during the operation. 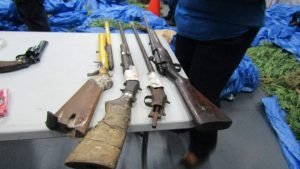 “There were actually guys that pointed guns at us, high powered guns at us up there at Faleatiu, but for some reason they changed their minds. Our units were ready to do what they needed to do, but we were fortunate that they decided to back down.”

“About two weeks ago ga faga ai foi le kamaikiki mai luga i o. Faga a, pu uma le alafau. He should be out of hospital now, but he is very lucky to be alive; and it is all to do with marijuana up there in Faleatiu.”

Cash, a glass pipe used for smoking meth (ice) and several weapons including a high powered rifle were also seized and confiscated.

SPS issued a warning this week on those who continue to break the law by cultivating and dealing with marijuana and any form of illegal drugs to put an end to these criminal activities.

“SPS also encourages the members of the public who may have information or know of someone who continually cultivates and/or deals with illegal drugs to come forward and inform SPS.”