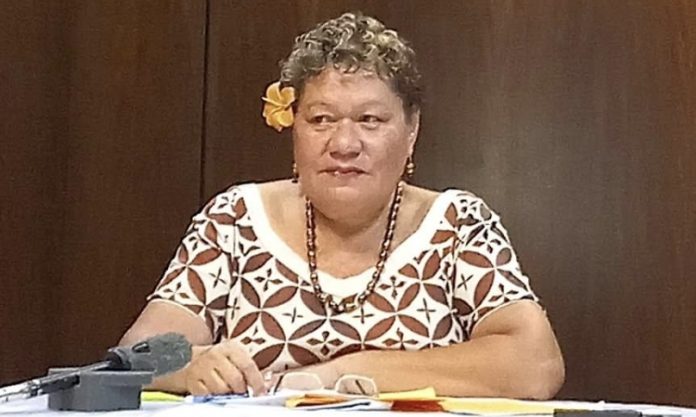 The decision by Samoa’s Cabinet that abruptly ends Afamasaga Dr Karoline Afamasaga-Fuatai’s 6-year run as CEO and over 40 years of service to the education sector had surfaced earlier Monday morning when a local radio station quoted it was revealed to them by “a Cabinet Minister who did not wish to be named”.

According to Dr Afamasaga Fuata’i, the grounds for her immediate dismissal of service is believed to be linked to last week’s public notice blunder regarding the re-start of schools. This was confirmed by the Minister of Education to SGN.

The MESC Chief Executive had signed off on a public notice informing parents that schools would close for a further two weeks in accordance with a Cabinet Directive, when in fact the Prime Minister had announced Samoa was downgrading to Level 1, and schools would re-open.

The wrong notice was in circulation for just over an hour  last Friday night before it was quickly retracted by MESC, and replaced with an updated one.

Afamasaga Dr Karoline Fuatai was the epitome of elegant diplomacy when she faced the media Monday afternoon at the Ministry’s Malifa headquarters, bowing out gracefully with an explanation for last week’s mishap.

“Cabinet has the right to make their decisions,” she told local media. “There are PSC values and code of conduct.. and part of that is to follow the values that we have..

“The mistake or the misinformation on our part last week, has resulted in this”.

Afamasaga said in retrospect, it was a communication issue.

She says there were in fact, two Cabinet Directives or FKs (Faaiuga Kepeneta) issued on that Friday.

An earlier FK (fākā) had stated SOE Level 2 would be extending until March. According to Afamasaga they had completely missed a second Cabinet Directive issued after 3pm on Friday afternoon which she later learnt about through a PSC circular.

“If only MESC were copied into the FK that was sent to the Public Service, but we weren’t copied, none of the Ministries were copied..

“But it is still my duty as the MESC CEO to try and get the latest copy of the FK, so that’s my lapse,” she concedes diplomatically.

Asked if she intended to re-apply for the role, Afamasaga said she would be taking things one day at a time from hereon in.

“This is the last day, and I’m trying to be strong today. All of that will come later. But right now, I am following the directions given, and packing my boxes,” she told the media

Cabinet’s decision to remove Afamasaga annulled an earlier FK issued last December that granted the MESC CEO and several other government CEOs six-month contract extensions to await the recruitment process which could take up to three months from the point of advertising.

“I received a FK dated 22 December 2021, that my contract has been extended, so when my contract finished on the 8th of February, then the contract variation started on the 9th..”

Afamasaga confirmed she has received a FK that annulls the contract extension, demanding her services are terminated effective immediately.

The outgoing CEO explains the misunderstanding with two FKs issued.

“As a Ministry, it is our common process, and it is a commonly known process, for all instructions on the SOE or for the work that we should do, to wait for a FK..

“We do that to make sure that we reflect in our notices what is in the body of the FK..

“Last week, work closed at 3 o’clock and we were waiting for a FK to arrive..

“Just before 3pm we received a FK that the proclamation period is extended up to March and the second line was about the SOE being extended..

“Around that time this was the only FK we had received. So we structured our notice derived from that, to extend the closure of schools by 2 weeks,” Afamasaga explained.

“But as soon as we knew there was another FK, a new one, issued on that Friday, I called the Office of the Prime Minister to find out.. and so the notice was only up for less than two hours”.

One of the country’s best mathematics heads, Dr Afamasaga-Fuatai said there was no ill intention whatsoever, or any wilfull attempt to disobey a Cabinet Directive.

“We were just following procedure,” she said.

“I always follow the rules and guidelines because I’m a mathematician, so this is second nature..”

Asked by local media how she felt about the decision Afamasaga said she felt good to have been able to impact lives through her role as CEO.

“I feel good that I have done the best I can in the past 6 years..

“Based on the testimonies of my core management, I am grateful that I have made a difference in their lives as managers and leaders of divisions..

“And that is what I take away from my work..

“And if I’ve made a difference in the lives of the students out there, through the teachers that I support under my leadership  with the blessings of government – then grace be to God because we are only here to serve..

“This is my calling, and I’ve done the best I can”.

One of Samoa’s longest serving public servants was asked by local media how she felt about her career ending this way.

“I feel like any human being and any Samoan who returned to serve, and I have served, faithfully,” said Afamasaga.

“In 1992 I came back with my PhD and was told to go and work at the National University of Samoa. I wanted to go back to Samoa College. But, I followed the directions of Government and went to NUS”.

Dr Afamasaga-Fuatai served as at the National University of Samoa from 1992 to 2004. She then took up a post and further studies with the University of New England in Australia between 2004 and 2009. She returned to again serve at NUS from 2009 until she was appointed as CEO in 2016.

“When Laaulialemalietoa called for your resignation, your Minister said it was a trivial thing.. and yet your contract extension had still been annulled,” asked the local media. “What do you say about that?”.

“I cannot know how their minds work and they have a right to their opinion. It is un-Samoan to speak about the opinions of others, especially when they are leaders,” said the outgoing CEO.

Asked if the decision was fair, Afamasaga responded, “no comment”.