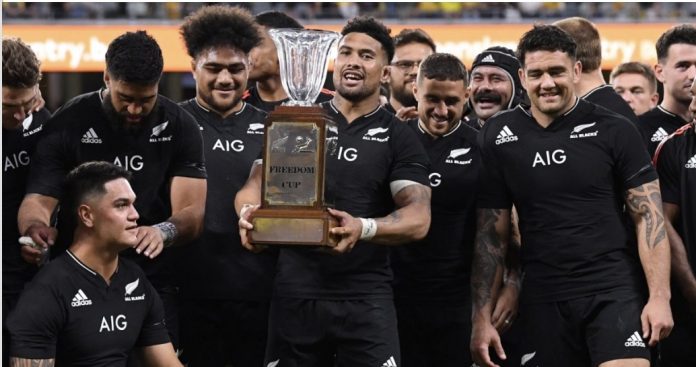 South Africa secured the Rugby Championship opener by 26-10 last weekend. It was the All Blacks fifth loss in six games.

For the second test against the Springboks (4am Samoa Time) Sam Cane has retained his place as openside flanker and captain.  He takes the field alongside No 8 Ardie Savea and Shannon Frizell, who has been called up to fill the No 6 jersey while Akira Ioane moves to the bench.

Ahead of the Rugby Championship, Planet Rugby writer David Skippers had made the case for Ardie Savea to replace Sam Cane as All Blacks captain.

With the fallout of New Zealand’s recent poor run of form showing no signs of ending, their head coach, Ian Foster, and captain, Cane, remain in the firing line with many of their critics calling for the duo to be replaced in their positions.

Crusaders head coach Scott Robertson and the Christchurch-based outfit’s veteran second-row Sam Whitelock would be the favourites to replace the aforementioned duo in their respective positions, but Hurricanes skipper Savea‘s claims for the captaincy should not be ignored. In fact, Savea would be my first-choice for the captaincy and there are several reasons for this.

Firstly, while Cane, Whitelock and Savea all have outstanding leadership qualities, their form for the All Blacks should be the main criteria and in this department Savea beats out the other duo by some distance.

Savea is arguably the All Blacks’ best player at the moment and I can’t remember when last he played poorly – if ever – at international level.

By contrast, Cane has been struggling with his form of late and many of his critics believe Dalton Papalii or Savea, who is capable of playing in all three back-row positions, will do a better job as the All Blacks’ starting openside flanker.

Although Whitelock’s form is usually of a high standard, the adage that you’re only as good as your last game springs to mind when thinking of his current form as he hardly set the world alight in his last match for New Zealand – the deciding third Test against Ireland in Wellington last month.

In fact, there was plenty of hype around his return to the All Blacks side – after missing the second Test in Dunedin due to concussion – as his prowess at the lineouts was expected to give his team an edge but he made little impact in that department and came off second best in his direct duel with James Ryan.

Meanwhile, Cane disappeared in that encounter while, at times, it looked like Savea was taking on the men from the Emerald Isle on his own with his all-action style of play. And it’s that ability to lead by example which gives him an edge over Whitelock and inspires other players to follow him.

At 28, Savea is the right age to lead the team, especially if one looks beyond next year’s Rugby World Cup. A case could be made for Whitelock to skipper the three-time world champions at the World Cup but, at the age of 33, the Test centurion is in the twilight of his international career and while he could play on beyond the global showpiece in France, it won’t be for too long which would make handing him the captaincy a short-sighted move.

It must also be remembered that during last year’s Rugby Championship the All Blacks were thrown into a mini crisis during that campaign when Cane was ruled out through injury while Whitelock, who was next in line to take over the captaincy, was forced to miss the bulk of the competition after leaving the All Blacks camp in Australia to head back home to New Zealand for the birth of his third child.

Impressed as captain in 2021

Savea took over the leadership role ahead of their second Bledisloe Cup encounter against the Wallabies in Perth and made a good impression during a 38-21 victory for the All Blacks.

Although he missed New Zealand’s next Rugby Championship Test against Argentina on the Gold Coast due to concussion, he resumed his captaincy duties in the corresponding fixture with Los Pumas in Brisbane.

He also captained his country during their last two Rugby Championship fixtures against South Africa and although they suffered a late 31-29 defeat to the Springboks in the last encounter on the Gold Coast, New Zealand had already won the tournament by then as his calm leadership helped them over the line in a narrow 19-17 triumph in Townsville the previous week.

That was no mean feat as there was plenty of pressure on Savea ahead of that game, as it was the 100th Test between the arch rivals, but his captaincy played its part in that win and proved that he has what it takes to lead his country in a match of that magnitude – an experience which should stand him in good stead when he leads the team again, something which will hopefully be sooner rather than later.