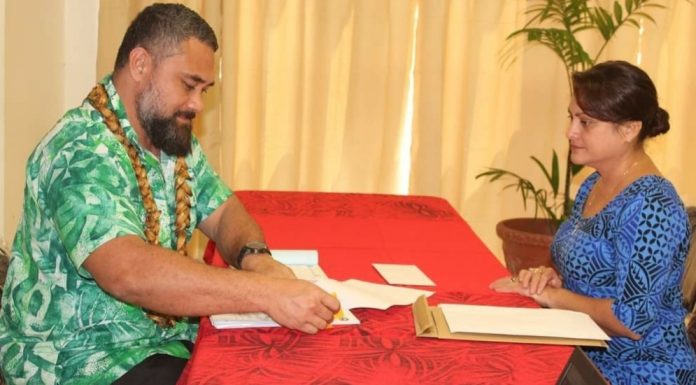 Of the 24 – there was only only one  female candidate registration, while the race between FAST and HRPP continues.

Maugaoalii had filed a law suit against the National University of Samoa earlier this year for wrongful dismissal when the NUS had dissolved the Deputy Vice Chancellor for Corporate Services position.

Lefau Harry Schuster and Papalii Panoa Tavita Moala have both registered to run under the banner of FAST for the upcoming election.

Papalii Panoa together with Tuala Ponifasio had contested the discriminatory nature of the Electoral Act 2019 in Court, resulting in recent amendments to S156 of the Act to address those affected by newly formed Electoral Constituencies.

Papalii and Lefau are both able to register for their preferred constituencies this week, as a result of those amendments.

Former HRPP MP Leatinuu Faumuina Wayne Fong was also seen registering as one of the candidates for FAST.

The Office of the Electoral Commissioner has confirmed that after the first week of registrations, a total of 71 candidates have been registered.

There were 47 registered candidates after the first three days in Savaii meaning Upolu’s first day brought in a total of 24 with only one female candidate.

Candidates have until Friday 23rd of October to register. Candidates intending to run in Savaii can also register in Upolu next week.