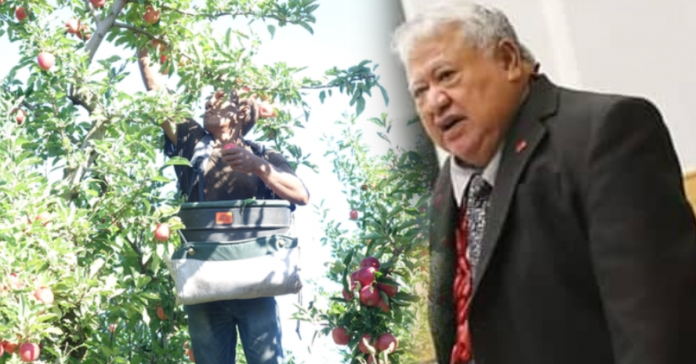 27 June 2019, Apia Samoa. Ten RSE workers were suspended for various reasons over the past 12 months, out of the 1800 currently employed in New Zealand under the scheme.

Prime Minister Tuilaepa Sailele Malielegaoi issued a warning to Recognised Seasonal Employees (RSEs) against irresponsible behaviour that may affect the chances of the two thousand Samoans currently on a waitlist for the scheme.

A report sent by the Trade Commissioner Magele Mauiliu Magele to the Prime Minister names 10 RSE workers suspended for various behaviours including theft as a servant, bullying as a team leader, distractions due to extra marital affairs, as well as marijuana and alcohol induced misdemeanors.

According to Samoa’s New Zealand based Regional Seasonal Employer Coordinator Lemalu Nele Leilua, 10 workers were suspended over a period of several months, and the list of 10 is part of her annual reporting to update Government officials.

Lemalu coordinates and manages more than 1,800 RSE workers across New Zealand and says these incidents are not common, but do come up from time and it also affects other Pacific Island Countries with workers under the scheme.

She confirmed that the most recent offenders were the two “newbies” from Moataa village who had been caught smoking marijuana in an orchard during work hours, resulting in their contracts being suspended by their employer.

Samoa Global News contacted two RSE employers who spoke highly of Samoan workers, upset that the current media reports focused on a few, whereas there are hundreds of workers that they say, are making it possible for them to harvest their produce.

Tuilaepa spoke strongly about the impacts of workers misbehaving, on the scheme as a whole, calling on village councils to take action against the suspended individuals. He said that naming them would make a public example out of the offenders.

According to the Prime Minister, bans on the workers’ villages should be imposed if Village Councils do not take action against the suspended RSEs.

Therehe village of Poutasi Falealili has been notable in its successful coordination of workers.

The publicised list includes three men from Poutasi Falealili, a village that has had notable success in the coordination of RSE workers since the scheme began.

Contacted for a comment high chief Tuatagaloa Joe Annandale of Poutasi says that the incident occurred several months ago and the Village Council did play their part to punish those involved as a deterrant measure, at the time.

“I can confirm that 3 men from our programme were sent home earlier this year for misdemeanors;

“They have been dealt with by their respective villages and will also be stood down for up to two years,” said Tuatagaloa.

Former Police Commissioner Asi Tuitaga Blakelock shed tears on national television as he spoke of how deeply saddened he was by the actions of the two men from his village of Moataa.

“This is a sad day for our village to be implicated by the actions of these 2 individuals,” he said in an interview aired on TV1 Samoa.

Asi Blakelock also confirmed that the usual village disciplinary actions would be taken against the offenders.

The Prime Minister issued a statement to confirm the suspension of the named workers and their villages until further notice.

“As of today, the expelled workers and their respective villages are blacklisted from participating in the RSE programs until further notice,” said the Prime Minister.