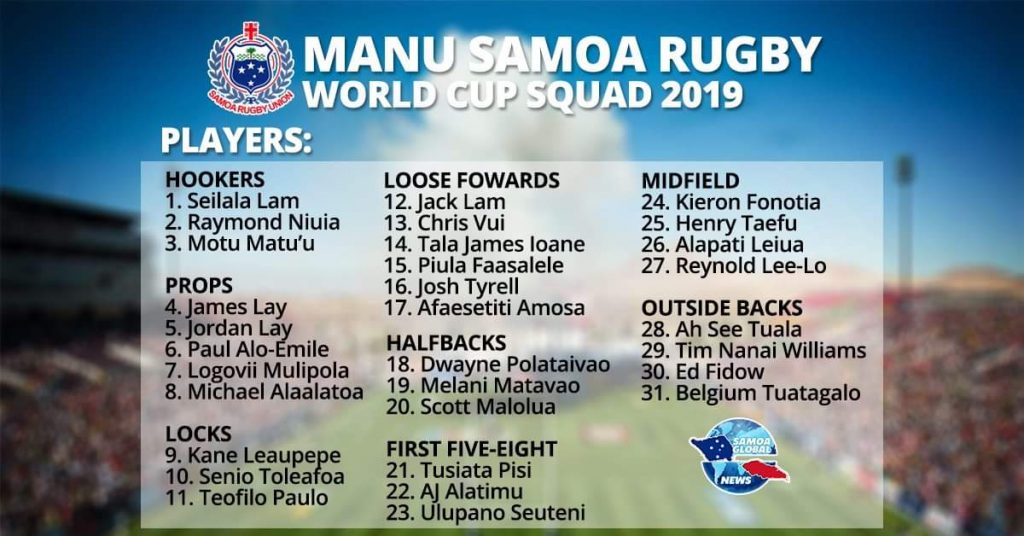 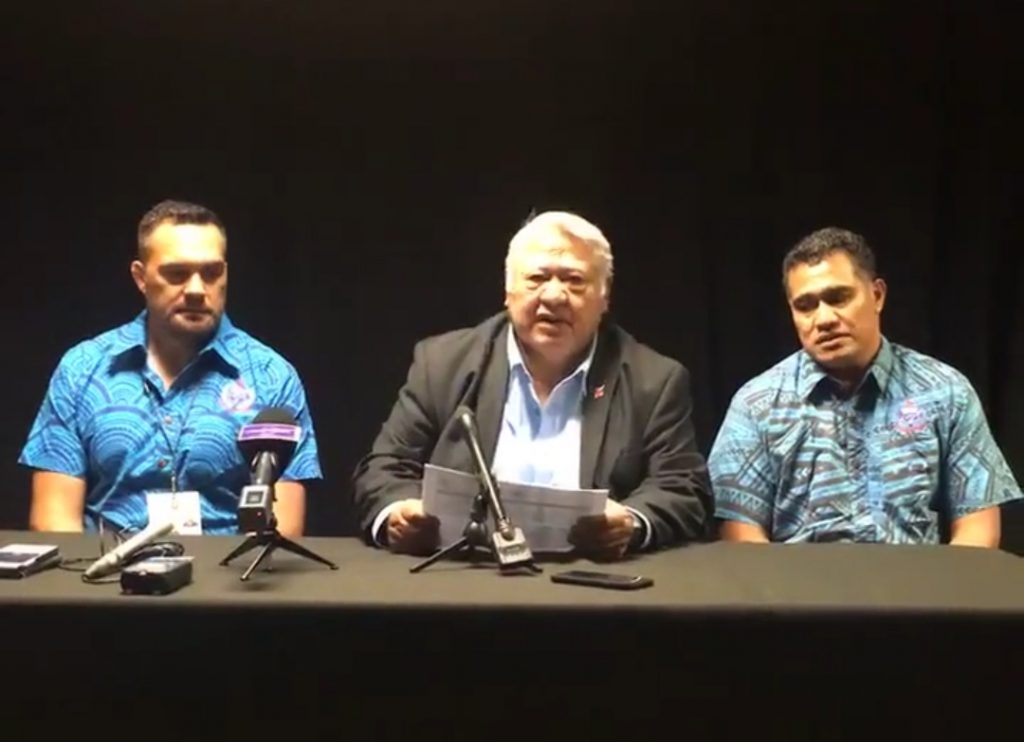 Of the 34 players camped in Auckland, the three who miss out are Western Force flanker Henry Stowers, and 2 locals – Aana Chiefs hooker and Samoa A captain Afa Aiono and Southern Tornadoes power forward and 7s star Tofatuimoana Solia.

Props
Headlined by Super Rugby Champion and Crusaders prop Michael Alaalatoa, Manu Samoa has named a strong group of props. Alongside Alaalatoa is Logovii Mulipola who is entering his 3rd World Cup campaign with the Manu. Lay brothers James and Jordan have been with the Manu Samoa since 2017 and have 20 test matches between them.

Loose Fowards
Captain Jack Lam is one of six loose forwards named in Jackson’s side. Only he and TJ Ioane survive from the 2015 World Cup. Chris Vui, Piula Faasalele, Josh Tyrell and Afaesetiti Amosa will all be new comers to the World Cup stage. According to management Piula Faasaelele still seen with a cast on his arm from an injury during the USA match will be given the all-clear this week.
Halfbacks
The only local based Samoan player named in the 31-man squad is found in the halfbacks. Melani Matavao has come through Samoa’s PPS Super 9 competiton as a key player for the Aana Chiefs. He played for the Manu Samoa 7s and at 23, he is also the youngest member of the squad. Dwayne Polataivao was first selected into the Manu Samoa in 2016 and now plays his rugby for Doncaster in England while Scott Malolua debuted for the Manu Samoa in yesterday’s match against NZ Heartland.
First five-eight
Perhaps the most discussed position in this team with Coach Steve Jackson naming 37-year old Tusi Pisi for his 3rd World Cup campaign for Samoa.
AJ Alatimu played for the Samoa U20s in 2012 and was first called into the Manu Samoa for the Northern Hemisphere tour of 2017.  25-year old Ulupano ‘UJ’ Seuteni is a recent debutant for the Manu Samoa who plays for Bordeaux Begles in France. He was a member of the Australian U20s in 2012.

Seasoned veteran Tim Nanai Williams will attend his second World Cup in the blue jersey. Ed Fidow rejoins the squad after being recently signed by Worcester from a D2 French club. Veteran winger Belgium Tuatagaloa adds to an experienced outside backs line-up.

The Manu Samoa gets a final hit out against Australia in Syndey this weekend before the Rugby World cup where they face Russia, Scotland, Japan and Ireland in Pool A.