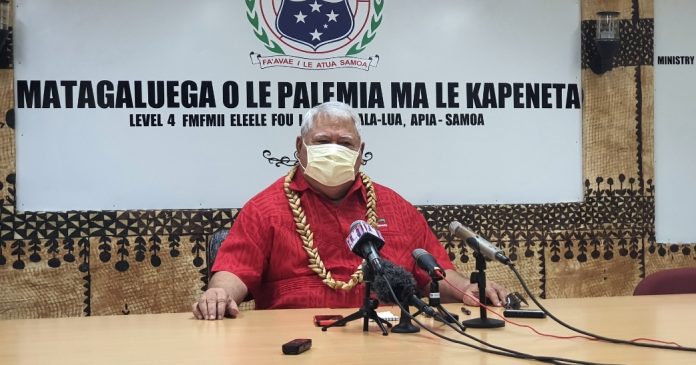 The Prime Minister has confirmed one case for Samoa from one a passenger of the 15th repatriation flight that arrived into Samoa last Friday 13 November 2020.

Samoa’s first case is a sailor, a young man who travelled to catch the repatriation flight from New Zealand. He is in complete isolation to ensure Samoa remains safe.

According to the Prime Minister the young man tested positive last night, but a test conducted at 6am this morning returned negative.

Samoa, however is treating it as a positive case until further testing.

The young man does not have any symptoms and is in good health otherwise, says the Prime Minister.

He reiterates that this is a first test and that follow up tests will be conducted today.

“He will be retested again; if it weren’t for the test, we would not have known he was positive, but he shows no symptoms whatsoever.”

The testing of other passengers and contact tracing is well underway, including first respondents health care workers and airport personnel.

Prime Minister Tuilaepa Sailele Malielegaoi says it is important to not panic, confirming that there are no changes to the State of Emergency Rules at this stage.

“Samoa has been ready for this for months now and we have total confidence in our processes..”

Tuilaepa says Cabinet will meet this afternoon at midday to confirm any changes to SOE protocols, and also discuss the three repatriation flights expected before the end of the year.

The Prime Minister reiterated that there was no need to panic and calls on the nation to continue to take precautions such as social distancing and wearing masks.

“As you can see I’m wearing a mask..so take precautions as we have been doing in the past 9 months..”

In the meantime Samoa will extend the State of Emergency for another 30 days.