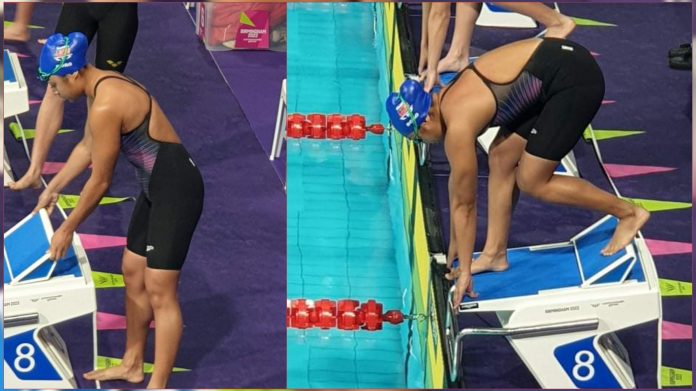 Samoa swimming have been attending the Commonwealth Games since 2010, and this year, Olivia Borg has reached new heights by becoming the first Samoan swimmer to make the semi-final round, in the 50m butterfly category with a time of 0:27:42

In the semi finals, Olivia’s time dropped further to 0:27:37 setting a new national record for Samoa.

Ms Borg first represented Samoa in June this year at the FINA LCM competition where she swam the 50m fly at 0:27:43.

The newest member of Team Samoa Swimming looked to have made it a double when she finished first in her 100m butterfly heat with a time of 0:57:53 seconds, but despite her best efforts, the Samoan swimmer was unable to advance to her second semi-final, missing out by mere milliseconds.

Olivia has set a new national record in all four of her events at the Commonwealth Games – the 50m Butterfly, 100m Butterfly, 4x100m Mixed Medley Relay and the Freestyle Relay.

“I’ve been swimming since I was 8 years old,” said Borg in response to questions from Samoa Global News. “It has been tough both physically and mentally, but to now be competing at my first Commonwealth Games is a dream come true. The opportunity to be in the company of other elite athletes excites me and pushes me to do better”.

Olivia Borg competed in the 4x100m medley alongside her other team members, the elite athletes that inspire her, and together they set another National Record for Samoa.

In the lead-up to the Commonwealth Games Olivia Borg says perseverance and resilience have been key aspects for her.
“I had a short turn around between the World Swimming Championships in Budapest, Hungary and the  Commonwealth Games here in Birmingham, so it was all about balance with recovery .. and making sure my body and mind were well rested whilst keeping the intensity up with my training”.

Speaking to Samoa Global News from Birmingham, Samoa’s long serving National Swimming Coach, Suzie Schuster, said all four swimmers are closing in on their personal best times, which is a commendable effort given the challenges Covid-19 has placed on their preparations and lead-up to the games.

“All swimmers are coming within their overall personal best and most are hitting their season best. It has been a difficult season with closed borders and cancelled events, but their endurance and commitment to the sport is inspiring and has made great gains for Samoa Swimming and the Oceania region,” said Samoa’s long serving swimming coach and main inspiration behind Samoa’s swimming success.

Samoa’s first Commonwealth Games semi-finalists says being faced with tough times is an opportunity to test one’s character and resilience.

“I encourage everyone especially our youth to continue to persevere with their goals and dreams and to be resilient, pushing through when the tough times come”.

Olivia Borg says she is excited to join Samoa’s swimming team and looks forward to help pave the way for future swimmers.

“I have received so much love and support from Samoa since joining the national swimming team. I want to thank you all for your support.”