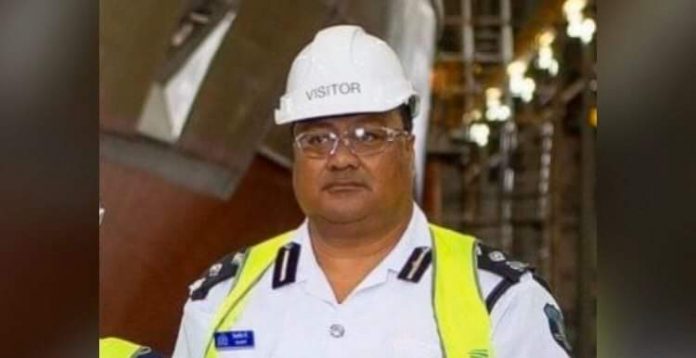 The Officer in Charge of Police Maritime and the Nafanua II  Superintendent Taito Sefo Faafoi Hunt was suspended last Thursday.

Deputy Police Commissioner, Auapa’au Logoitino Filipo confirmed to Samoa Global News that Taito has been suspended while investigations continue into the incident that ran aground the Nafanua II Police Patrol boat at Salelologa waters in early August.

Auapa’au says there is no timeframe of the suspension. In the meantime two special Technical Advisors from Australia have arrived into Samoa to assist with the salvage mission of the $30 million tala patrol boat.

“The suspension was based on section 52 of the Police Service Act 2009,” Auapa’au confirmed.

52. Suspension of members for breach of duty – (1) When a charge has been made that any
member, other than the Commissioner or an assistant commissioner, has committed a breach of duty
or an offence punishable by imprisonment, the member may be suspended from duty until such time:
(a) as the charge has been inquired into and disposed of under section 51; or
(b) for a criminal offence for which the member has been charged, the charge has been either
dismissed by the Court, or the member has been acquitted.
(2) No suspension pursuant to this section shall continue for longer than 1month except where:
(a) an information has been filed in any Court charging the member with the offence; or
(b) any delay in holding or concluding an inquiry into the charge or an appeal occurs through any
circumstances beyond the control of the Commissioner.
(3) A member who is suspended from duty under this section:
(a) may at any time be reinstated in the Service, in his or her old position or any other, by the
authority who suspended him or her; and
(b) is entitled to receive his or her salary, allowance or other remuneration in respect of the period of
his or her suspension.