The Head of Samoa’s Office of the Regulator (OOTR), Lematua Gisa Fuatai-Purcell says BlueWave Wireless has satisfied all the requirements of the office’s requests to produce financial statements, and is in full compliance with the Telecommunications Act 2004.

In a joint press conference called by the Minister of Education and the Office of the Regulator this week, Lematua said there had been a number of newspaper articles and public speculation in recent weeks that have called into question the integrity of BlueWave Wireless’ operations and adherence to legal requirements.

The Regulator, in an issued statement refers to Samoa Observer articles published on 5 and 7 July 2022.

According to Lematua, the articles “do not provide an accurate summary of the situation because Order No. 2022/T03 issued by this office revoked the previous order No. 2022/T02 that was issued in error while I was out of the country.”

Both Samoa Observer and Radio Polynesia, had published both orders, highlighting that one had been issued soon after the other without an explanation as to why.

The second order signed by the Regulator is dated 22 June 2022 and reads “pursuant to section 8(1) of the Telecommunications Act 2005, the Regulator revokes” the first order issued on 16 June 2022.

The first order cited the “unresponsiveness of Bluewave” to the requests to submit audited financial statements required for the calculation of Bluewave’s annual license fees and at that time, the OOTR warned Bluewave tha failing to comply with the Order would result in the Office of the Regulator taking appropriate legal action for non-compliance.

However the public are now assured that the Office of the Regulator had issued the first order referring to Bluewave Wireless’ non-compliance, by mistake or in error, during a time when the CEO was out of the country.

The owners of Bluewave Wireless, previously known as Netvo, had made a public announcement in September 2020 of their intention to roll out a community project that would supply free wifi to all schools.

At the time, founder of the E3 Samoa Trust, Togisala Tony Leota says the ‘Free School Wi-Fi Project’ is being implemented by his not-for-profit organisation, with installation and technical expertise provided by local telco company, Netvo Samoa in partnership with the FAST political party.

Netvo has since closed down as a business, as an internet service provider and IT firm in Samoa, while it’s owners now operate under BlueWave Wireless.

This week the Regulator says it is her responsibility to ensure the public are given full assurance that there is orderly regulation of the telecommunications sector in Samoa and that it is transparent in its processes, “and that the interests of children are protected by the provision of services”.

“In the case of the BlueWave Wireless school focused internet project,” says Lematua, “the Office of the Regulator assures the public that due process has been followed and executed, including appropriate checks to ensure school children are protected by firewalls which prevent users from accessing harmful sites..

“The Office of the Regulator will continue to monitor this project and be transparent in its processes to ensure the interests of school children have been met by the provision of these services, and that integrity of our regulation sector is upheld,” Lematua Gisa Fuatai-Purcell concludes.

In the meantime, a company by the name of Bluewave Samoa who were awarded the $5k tala prize money for their design of Samoa’s 60th Independence anniversary logo, have issued a public statement to assure its customers that they are a totally different company to BlueWave Wireless. 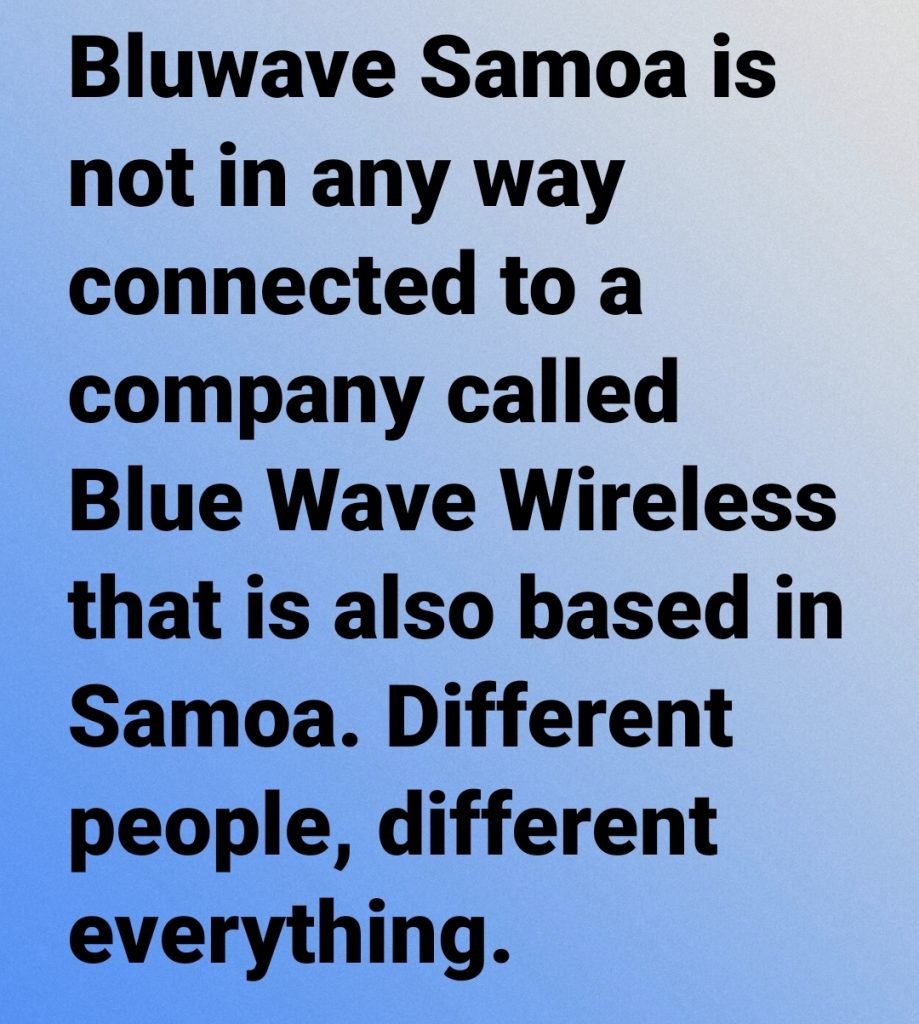