The Office of the Electoral Commissioner has responded to suggestions that the decision to activate Article 44(1A) in order to satisfy the minimum number of women in Parliament, was politically influenced.

In a press statement issued this week, the OEC says public comments questioning the integrity of the Commission are “ill-advised and ill-conceived”.

Hon Fiame questioned the integrity of the Electoral Commissioner during a live interview with the media this week: “What happened? Did he just wake up one morning and said, No there shall be 6 women.. Or did someone whisper to him.., or did someone advise him such as the AG.. but the question is.. who changed his mind?” said Fiame.

Taulapapa Brenda Heather-Latu, on the other hand, likened the late night move to announce the additional Member of Parliament to a political coup.

In a press statement, the OEC writes…,

“We wish to reiterate that the OEC is independent, transparent and accountable. The OEC is mandated to carry out elections which was executed in accordance with the laws that govern the work of the OEC. Any suggestions or implications otherwise are ill-advised and ill-conceived”.

The Electoral Commissioner has come under fire since the announcement of its decision to activate Article 44(1A) of Samoa’s Constitution and declare Aliimalemanu Alofa Tuuau of Alataua i Sisifo an additional Member of Parliament.  The validity of this decision is now with the Courts, and the OEC acknowledges this in their press statement.

“This matter is now before the Courts and as such we have no further comment until a decision by the Courts”.

When the OEC announced that there would be a 52nd Member of the Legislative Assembly, it was four days after the official results had declared a hung parliament of 25 HRPP, 25 FAST and 1 Independent. 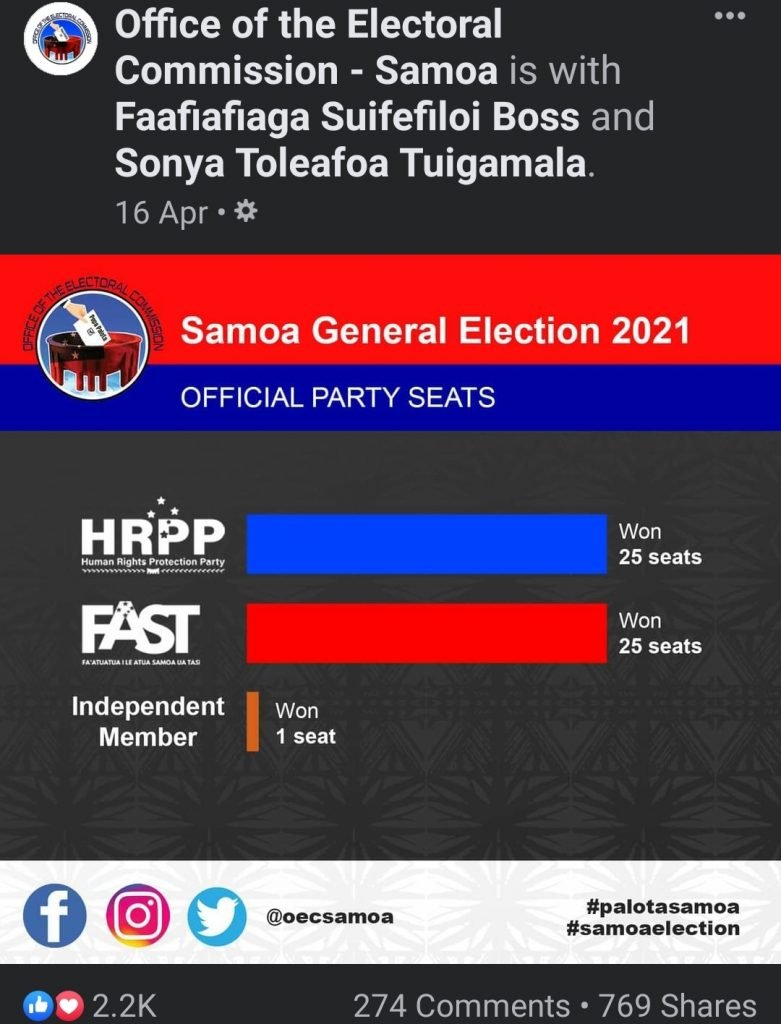 The addition of Aliimalemanu Alofa Tuuau at 9pm on Tuesday 16th April 2021 took HRPP to 26 seats. The very next morning, Independent Member Tuala Iosefo Ponifasio announced his allegiance to FAST, taking their number to 26, leaving Samoa in its current stalemate of 26-26.

OEC has also been publicly attacked for making the announcement on their Facebook page. In response the Office of the Electoral Commission says they have been using social media platforms to disseminate important information since 2014.

“OEC utilizes social media, traditional and online media to release pertinent information relating to the election to ensure that members of the public receive information in a timely manner. Information is released on social media as they become available. This has been the practice of the OEC since 2014”.

This week, FAST leader Hon. Fiame Naomi Mataafa and Tuala Iosefo Ponifasio called a press conference to convey their concerns that the OEC has been ‘back and forth’ (fefo’ifo’ia’i) with announcements. Fiame explained that she and Tuala had written to the Clerk of the Legislative Assembly to confirm their move from Independent Members, to join FAST. Fiame says Independent Members are allowed under the Law to move to a political party following an election.

“Instead of the Clerk responding to our letter, the Electoral Commissioner responded to say that we are still considered Independents until Parliament is called,” said Fiame.

“The only explanation we can think of, is that they want to reiterate HRPP is leading with 26, while we have 24 and 2 Independents,” said Fiame.

Fiame referred to the official announcement of the Samoa General Elections, issued on Friday 16th April 2021, where the OEC announced 25 HRPP, 25 FAST, 1 Independent.

“That means he read me as one of the 25.. but these announcements changing back and forth, are questionable in my mind,” said the Sa’o Fa’apito.

In response the OEC goes into the technicalities of Parliamentary Standing Orders outlining the timing of when Independents can be recognised in Parliament. The detailed explanation published in verbatim below, suggests it is now the OEC’s position that Fiame and Tuala are considered Independent, until Parliament is called.

Fiame says, “This may be a technicality, however, we can just walk into Parliament on the first day and declare ourselves as FAST, as we are allowed to do so under the Law..”

In an interview with the Savali Newspaper published this week, the leader of HRPP Hon Tuilaepa Sailele Malielegaoi, states the results of the General Election to be, HRPP – 26, FAST – 24, Independents – 2.

“There are many possibilities and options,” said Tuilaepa.. “Remember, if we go by the way things should be..HRPP are ahead with 26, with FAST at 24, and two Independents”.

A substantive court hearing to determine the validity of the OEC’s decision to activate Article 44(1A) of the Constitution will be heard before the Supreme Court of Samoa next week Wednesday 5th May 2021.

OEC has already explained its position on this matter. The “Official Documents” note the standing of all candidates including Independent. The Standing Orders of the Parliament of Samoa clearly outlines the process of recognition of political parties and candidate affiliation in Part VII.

It specifies as follows:

“21. Recognition of Parties:
(1) At the commencement of each Parliament any group of members of not less than eight (8) shall
be recognized as a party in Parliament on its leader notifying the Speaker: Provided that the party is registered as a party by the Electoral Commissioner pursuant to section 15A of the
Electoral Act 1963.
(2) A party must inform the Speaker of:
(a) the name of the party;
(b) the identity of the leader and deputy leader;
(c) its Parliamentary membership.”

Additionally we wish to highlight the following sub sections:
“(6) For parliamentary purposes:
(a) any member who takes the Oath of Allegiance before he or she is notified under a party as required by (2)(c) of this Order shall be recognized as an independent member for the duration of the
parliamentary term.”

Please be advised that the new Parliament has yet to commence as per requirement of Order 21(1) to initiate the process of officially recognizing Political Parties and Members in Parliament.