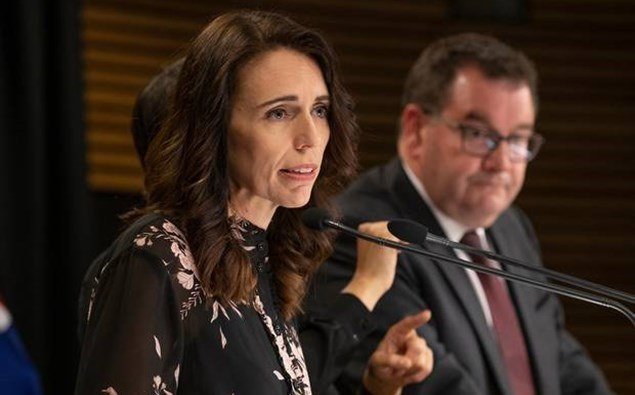 Schools and non-essential services across New Zealand will be closed for the next four weeks after the Government put the country in lockdown to try to stop the spread of coronavirus.

Prime Minister Jacinda Ardern said these moves would save the lives of tens of thousands of New Zealanders.

She announced today that the country’s coronavirus alert level would be raised to level 3.

In 48 hours the alert level would be raised to level 4 and Ardern said these measures will remain in place for a minimum of four weeks.

“I have a very keen sense of the magnitude of this moment in New Zealand’s history and we did not take this decision lightly.”

“But we all absolutely believe, this is the right thing to do. We will save lives by taking mese measures now.”

Areas could have alert level 4 lifted depending on how Covid-19 is present, but that depended on what happened in the next month.

She said it would take a concerted effort in the next four weeks, including rigorous monitoring of transmission.

The change was because of the confirmation of community transmission, but allowing 48 hours at alert level 3 so people could “get their things in order” before New Zealand moved to alert level 4, she said.

There have been 36 new coronavirus cases in the last 24 hours, bringing the total number in New Zealand to 102 confirmed cases. Two of those cases are now considered community transmission cases.

Ardern said the situation was moving at pace “and so must we”.

Essential services would still be open at all alert levels, she said.

She said when people were visiting essential services, physical distancing should still be practiced.

Schools would close from tomorrow, except for those people who work in essential services with kids at schools.

Without these measures, up to tens of thousands of people could die, according to medical modeling considered by Cabinet today.

“The worst-case scenario is simply intolerable,” she said.

It would be the greatest loss of life to a single event in New Zealand’s history.

“I hope that you are all with me on that decision.”

The measures would hit the economy hard, but they were necessary, she said.

“If community transmission takes off in New Zealand, the number of cases will double every five days.”

That would lead to health systems overwhelmed and the potential for tens of thousands of New Zealand deaths, she said.

“Our plan is simple. We can stop the spread by staying at home and reducing contact. Now is the time to act.”

Ardern said she was not scared because the Government had a plan. “We have the opportunity to make sure we are not like other places.”

All New Zealanders not in essential services are now being asked to stay at home, but leaving the house for exercise or for a walk was still allowed.

“It must be solitary,” she said, and being outside meant keeping a 2 metre distance from others.

People could also go outside with those they shared a house with.

Building works on, for example, a hospital, would continue, she said. Public servants such as those administering welfare payments, police and healthcare all fall under essential services, Ardern said.

There would be no roadblocks.

“All indoor and outdoor events cannot proceed. In short, we are all now preparing as a nation to go into self-isolation in the same way we have seen other countries do. Staying at home is essential.”

That would give the health system a chance to cope, she said.

While in alert level 4, Ardern said contact tracing would continue and testing would go on “at pace” to find out where cases are.

If we flush out cases we already have, and slow down transmission, areas could move out of level 4, she said.

Community transmission had a lag time, and these measures would be in place for at least four weeks, she said.

She repeated that pharmacy products will still be available, and supermarkets would stay open.

Funding for educational institutes would continue.

All schools and ECE centres would close from midnight Wednesday.

They would be open for 48 hours so that essential workers did not have to make sudden arrangements for childcare.

He said the key focus was on winding down schools, ECEs and universities, and scaling up online learning was being looked at.

Dealing with equity issues, such as variations in access to broadband, was also being looked at.

Parents of children with learning disabilities should talk to their schools, he said.

Finance Minister Grant Robertson said that Cabinet decided to do more to cushion the impact of Covid-19.

The wage subsidy would have no cap, so all businesses will be eligible.

Businesses less than a year old were now also eligible, as were self-employed people, registered charities, NGOs, and incorporated societies.

He said rents would also be frozen.

The Government had also agreed in principle to guarantee lending to businesses to help their survival. Details were being finalised.

“We are also making urgent preparations for further income support for all workers as we move into alert 4.”

He asked workers and firms to talk to each other, to talk to banks, and to make a plan. He said all workers would keep making an income in this period

“We are all in this together.”

Robertson said the wage subsidy changes had no financial cap, and was available for 12 weeks – but it would be reviewed and could be extended.

Ardern asked people not to self-police the measures. “People are afraid and they are anxious, We will play the role of enforcer.”

Enforcement would be through police, she said.

Ardern said the military could work with police to enforce the measures.

She would issue an epidemic notice which, under the 1956 Health Act, gives the necessary powers. A Civil Defence emergency would also be declared, she said.

She would issue an epidemic notice which, under the 1956 Health Act, gives the necessary powers. A Civil Defence emergency would also be declared, she said.

ARDERN BASED IN WELLINGTON

Ardern said she would remain based in Wellington, and her contact with others would be “very limited”.

“I will only really be present here in this building and the building where I live.”

Other Ministers have been told to work from home, she said.

She said she had contacted National leader Simon Bridges, who expressed support for the measures announced today.

Parliament was working through how it would continue to work under alert level 4.

“There will still be accountability and we will be enabling the Opposition to play that role,” she said, but those details were still being worked through.

Ardern ruled out a “grand coalition” that would include the Opposition in decision-making. She said there were still no plans at this stage to move the September 19 election.

All parliamentary business before select committees would be suspended.

Parliament would adjourn and there was no fixed date for when it will be resumed.