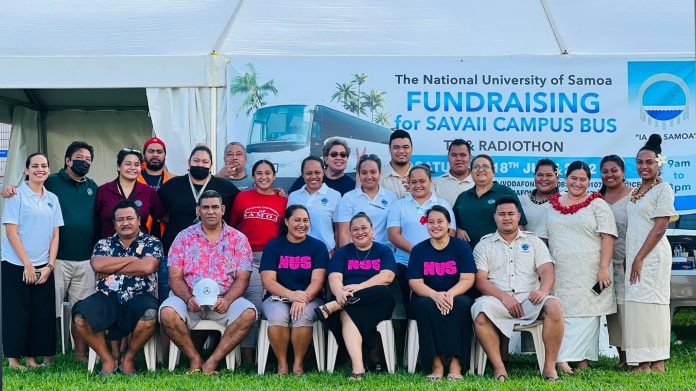 Apia, Samoa – Monday, 20th June 2022. The National University of Samoa conducted a Radio-thon & TV-thon fundraising event on Saturday 18th June, 2022 at two locations; the main one was at the Salelologa market in Savaii where the Acting Vice Chancellor and most of the NUS Fundraising Committee were present, and the other one was held in front of the Government building at Matagialalua.

The programme was broadcasted live on NUSTV8, NUS Facebook and the following local radio stations: 91.1 FM and 107.4 FM from 8 am until 3 pm. The opening ceremony was conducted by the Master of Ceremony: Afioga Mulipola John Lafaele – NUS Campus Manager for Savaii and the opening prayer was led by Rev. Pou Tuigamala (Susuga i le Toeaina, Sui Ta’ita’i AOG i Samoa) with the official keynote address given by Afioga Peseta Dr Desmond Lee Hang – Deputy Vice Chancellor.

According to the Acting Vice Chancellor, “The main purpose of this fundraising drive is to raise enough funds to procure a bus for students currently enrolled at the Savaii Campus for their safety and transportation purposes. Hence, the radiothon is an appeal to former, future and current NUS students and their families as well as our local and overseas communities to contribute whatever they can afford to donate to this cause”.

The Executive and some members of the National University of Samoa Students’ Association (NUSSA) participated and supported this fundraising event, while the Savaii Campus Students performed an item and assisted as telephone operators. A total of SAT$30,600 was raised locally.

Meanwhile in Auckland, the NUS Vice Chancellor Professor Aiono Alec Ekeroma joined the NUS Fundraising Community in New Zealand with their own Fundraising Dinner for the NUS Savaii Bus on the same night we had the Radio-thon; which was held at the Talimana’o Function Centre in Auckland, New Zealand, at 279e East Tamaki. In the end the Auckland team raised $NZD$14,000.

The National University of Samoa wish to thank all those that gave generously to our Radiothon. We also acknowledge with gratitude our NZ-based Committee for their efforts: Utumo’u Henry Soagia (Chairman), Mailata Herman Kwan (Vice-Chair), Rasela Tauiliili (Treasurer). Nou Mata’utia (Secretary), Herman Junior Pesa Kwan (IT Support), and Tuitogamatoe Faga Si’ilata of Talimana’o Catering Services and others who have generously given their time, effort and money to support our cause. Faafetai tele.

All proceeds will go towards the purchasing of a bus for our Savaii Campus.