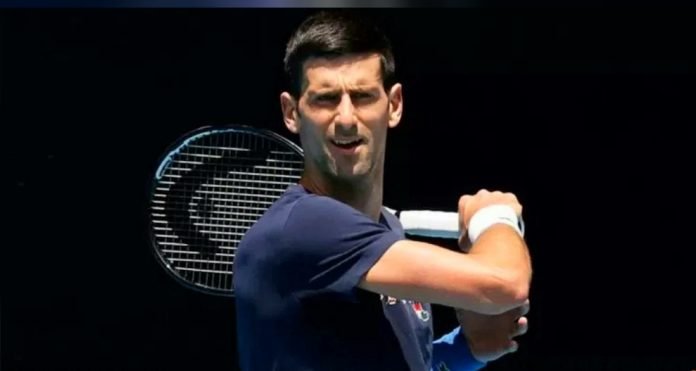 Novak Djokovic says he is willing to sacrifice more trophies, even at Wimbledon and the French Open, if tournament organisers insist he be vaccinated against COVID-19 to compete.

The Serbian gave his first interview on Tuesday since being deported from Australia and banned from defending his Open title and said he was not an anti-vaxxer but that he believed that it should be about choice.

He said he was still not vaccinated.

Speaking to the BBC’s Amol Rajan, Djokovic said had already accepted that his decision to not be jabbed meant he might have to forgo competing at Melbourne Park.

When asked if he was willing to forgo taking part in Wimbledon and the French Open, he said: “Yes, that is the price that I’m willing to pay.”

“Because the principles of decision-making on my body are more important than any title or anything else. I’m trying to be in tune with my body as much as I possibly can.

“I was never against vaccination,” he said, adding that he did not want the jab because of his careful management of everything that goes into his body as an elite athlete.

Britain allows unvaccinated people to enter, although they are subjected to isolation and testing restrictions that do not apply to vaccinated travellers. It does not have vaccine mandates.

But French President Emmanuel Macron, who has made it his mission to “piss off the unvaccinated” has imposed vaccine passports and his government has signalled it could copy Australia’s lead and impose a “no jab, no play,” requirement at Roland Garros.

Djokovic said he never thought himself above the rules.

“I agree that there shouldn’t be any special rules, I never used my privileged status to get into Australia by force, so I was treated like anyone else,” he said.

When asked what his message to ordinary Australians who had endured lockdowns would be, he said he understood the nation’s frustration.

“Australia has been through one of the most severe lockdowns that we had since the beginning of the pandemic,” he said. “So I can only imagine how hard it was for Australians and I sympathise, empathise with all the people. And I can understand that there has been a lot of frustrations from the Australian people towards me and towards the entire situation and the way it was dealt with, and I understand that.”

He rejected accusations he had faked a PCR test showing that he tested positive for the virus in mid-December in order to claim a medical exemption to enter Australia on the basis that the timing of his second infection precluded him from taking the jab.

“I take COVID very, very seriously, I assure you I was taking PCR tests as anyone else, I never used my privileged status in this country or any other country,” he said.

He said he had never said he was part of the anti-vaxxer movement and claimed that no one during the whole Australian saga asked him his opinion on vaccination.

” I can only imagine how hard it wss for Australians and i sympathize, empathize with all the people.”

“So I could not really express what I feel and what my stance is neither in the legal process, neither outside.”

Djokovic submitted his application anonymously to two medical boards to enter the tournament but ran into hurdles when he arrived in Melbourne and was stopped by Border Force who tried to deport him.

He successfully overturned the deportation in court but was unsuccessful a second time when the Australian government said he should be deported because he could inspire anti- vaxxers in Australia. The Federal Court agreed.

Australia has a vaccination rate of 95 per cent which is one of the highest in the world.

Meanwhile, relations between the Australian government and the tennis star may be thawing with Immigration Minister Alex Hawke suggesting Djokovic might not be required to pay the legal costs as per the January 10 court order.

“We’re happy that the full federal court gave the Commonwealth a costs order in this case and yes, that’ll have to be negotiated and worked out between parties,” Hawke told ABC Melbourne.

“But we obviously lost a costs order in the initial case, so there’s a bit of work to do but we think that we might be able to have no costs for either party.“

Asked whether an agreement needed to be reached before the tennis pro sought to play at next year’s Australian Open, the minister said unpaid costs could pose an issue.

“It can be a factor in people’s entry to Australia if they owe the Commonwealth money. That can be a consideration in visa applications,” he said.

“But, you know, obviously there’s a long way to go before that’s an issue.”