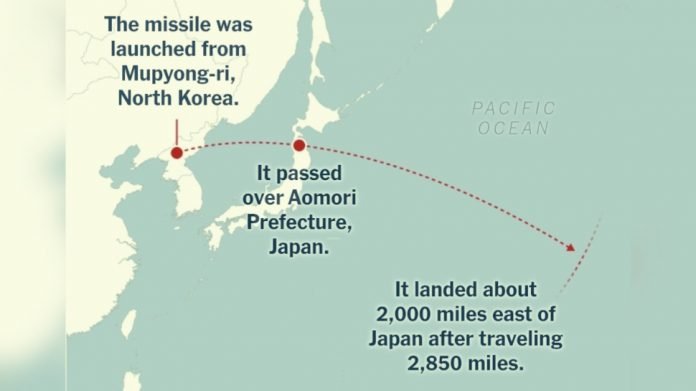 North Korea fired a intermediate-range missile over Japan for the first time in five years. It landed in the Pacific Ocean 22 minutes after the launch. But the Japanese government said it did not use any defence measures to destroy the missile.

Residents in Japan’s northern regions of Hokkaido and Aomori were awoken to prompted warning sirens, and advised to take shelter. Train services in the same regions were suspended temporarily.

The missile, detected by the Japanese coast guard and South Korea’s Joint Chiefs of Staff, flew about 2,800 miles.

This is the longest distance ever traveled by a North Korean missile, officials in Tokyo and Seoul said.

The missile appeared to have flown over and past Japanese territory before falling into the Pacific ocean. But the Japanese government said it did not use any defence measures to destroy the missile.

Tuesday’s launch is the seventh time since 1998 that North Korea has launched a missile over Japan, officials say.

The test was seen as a direct challenge to South Korea’s effort to strengthen its alliance with the United States and improve ties with Japan.

The United States strongly condemned North Korea’s “dangerous and reckless decision” to launch what it described as a “long-range ballistic missile” over Japan.

New Zealand Prime Minister Jacinda Ardern has condemned North Korea’s actions, saying it is “unacceptable – in law and in practise”.

Ardern said such behaviour needed to be “utterly” condemned.

“We’re seeing increasing use of ballistic missiles and testing coming from North Korea and we must continue to utterly condemn what is happening. It is a breach of international rules, it is a breach of that sense of security for the region, and so we stand with others in giving our condemnation,” she said.

“It is a risk, it’s an identified risk, it’s one that poses of course a significant threat to Japan. They continue to have our solidarity, but we’ve got to continue to work together as an international community to demonstrate that this is just totally unacceptable – in law, and in practise.”

She said North Korea’s stance on nuclear testing was particularly stark, given other nations’ pledges to commit to end such testing.