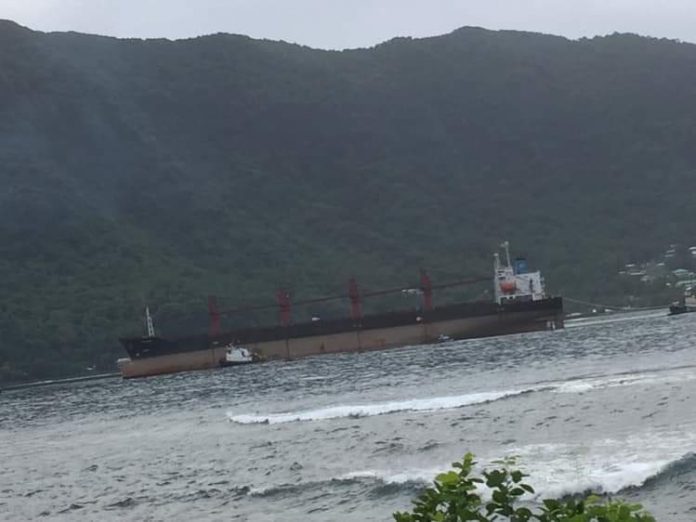 A North Korean freighter that was seized by the United States has been towed to American Samoa causing residents to raise questions as to why Pago and not Guam or Hawaii.

The Wise Honest is a 17,000 ton cargo ship which was stopped in Indonesia last year after it was found to be carrying coal in violation of UN sanctions, according to the US Justice Department in a statement issued earlier this week.

US Federal prosecutors said the seizure marks the first time the US has taken possession of a North Korean ship for violating international sanctions.

This morning as Pago residents celebrate Mother’s Day, the seized freighter was seen by residents being towed into the Pago port causing part of the port to be closed.

Talanei News has reported that US Coast Guard personnel from Hawaii arrived on a C-130 aircraft yesterday to await the freighter’s arrival.

Some residents have expressed concern about bringing the freighter to American Samoa and what it may lead to, raising questions as to why it wasn’t taken to Guam.

According to the Public Affairs officer, the local operation is being led by the US Department of Justice and the Coast Guard is helping maintain the integrity and condition of the vessel while in the Pago port.

Locals in American Samoa report that some of the Coast Guard personnel were armed when they arrived at the airport yesterday afternoon.

“Being towed here, any possibility that this ship must be QUARANTINED OFF-SHORE while on route to this destination for any HEALTH RISKS and ENVIRONMENTAL CONCERNS in light of its “known prior sanctioned CARGO violations” that might impact the LOCAL POPULATION before entering and docked in port?”

“This remotely isolated U.S. Territory does NOT need or deserve ANY unwarranted and/or unsolicited NEGATIVE INTERNATIONAL PUBLICITY by the TRUMP Administration;