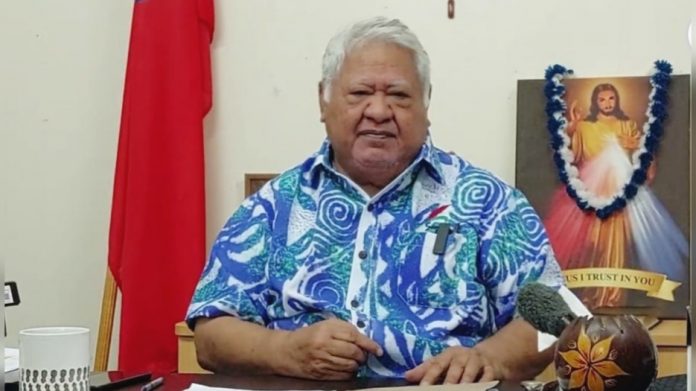 Human Rights Protection Party Hon Tuilaepa Dr Sailele Malielegaoi says he is concerned that the voice of constitiencies will not be heard following the 24 month suspension handed down by Parliament on himself and part secretary Lealailepule Rimoni Aiafi.

Speaking from HRPP headquarters at a press conference on Wednesday, Tuilaepa said the suspension period gravely affects voters who chose he and Lealailepule as their representatives into the Legislative Assembly of Samoa.

“This was a plot from the beginning, starting from the day they refused us entry into Parliament,” said Tuilaepa.

“So there’s nothing we could have said or done to change their minds.. they wanted us out.”

Samoa’s former Prime Minister said he did not want pity and didn’t feel the need to beg for forgiveness.

“It’s as if Leala and I committed a serious crime.. they treated us like criminals.”

Tuilaepa did not rule out the option of returning to the Court for a remedy, “especially on behalf of the voters who will not have a voice in Parliament.”

The suspensions of Tuilaepa and Lealailepule are effective until October 2024, making it 30 months since the first suspension was handed down in May 2022.

The leader and secretary of the opposition are suspended without pay, and are not permitted to enter the grounds of Parliament.

“But that will not stop us from carrying out our roles as opposition and pointing out the wrong that is going on..” said Tuilaepa.

Tuilaepa said he has forgiven everyone who voted to have them suspended for this extended period of time.

With his sense of humour still innact, Tuilaepa said they will always be available if amd when called upon.

“If they invite us to come for breakfast, we would gladly go along..”