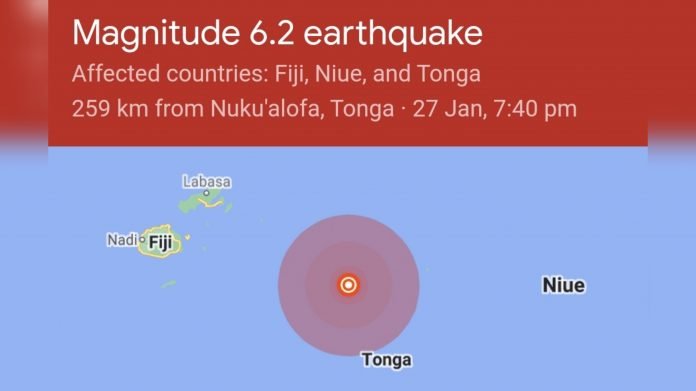 A magnitude 6.2 earthquake struck about 219km (136.1miles) west-northwest of Pangai, Tonga, on Thursday night, according to the United States Geological Survey (USGS).

The earthquake was at a depth of just 14.5km, and its epicentre located 259km Northwest of Nuku’alofa.

The USGS has issued a green alert for shaking-related fatalities however, there is a low likelihood of damage since there are reportedly no settlements within 100kms (62 miles).

There has been no tsunami warning issued by either the Tongan or Fijian authorities.

Fiji Meteorological Service said they had not received a warning from the Pacific Tsunami Centre in Hawaii.

New Zealand’s Civil Defence Emergency Management had also not received an alert on their radar.

The powerful underwater volcanic eruption was about a thousand times more powerful than the atomic bomb dropped by the US on Hiroshima during the Second World War, according to Nasa.

Three people, including two Tongan nationals and a British woman, were killed by the eruption and the tsunami that destroyed hundreds of homes and cut off communications on several islands.

The Tongan government said on Monday that more than 80 per cent of the country’s 105,000 inhabitants have been affected by the ashfall and tsunami.

Satellite images showed plumes of ash and dust over Tonga, with smoke rising about 12 miles above sea level. The eruption was so loud it was heard in Samoa as a thunder like sound. Residents in faraway Fiji and New Zealand also said they heard it.