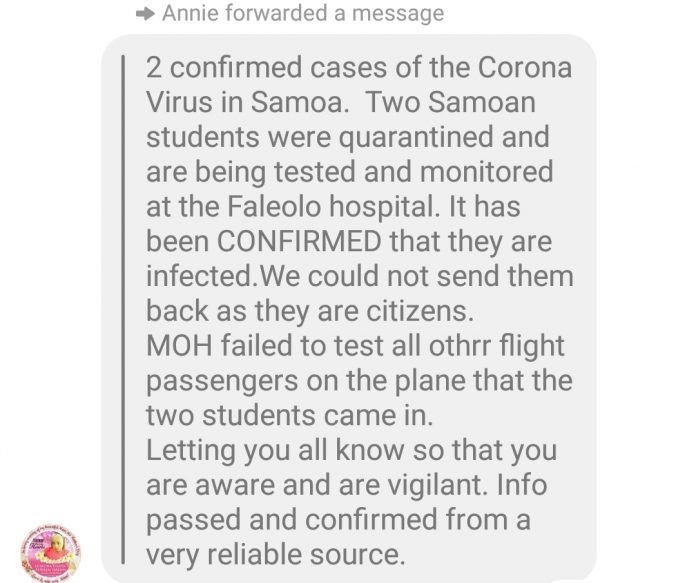 A dangerously irresponsible message is floating around social media amongst Samoan Facebook users alleging that two cases of the deadly coronavirus have been confirmed in Samoa.

The message, now flooding private message inboxes claims that two students had arrived from China infected with the coronavirus.

Responding to questions from Samoa Global News, the Director General of Health Leausa Dr. Take Naseri confirmed that there are no such cases and warns the public against causing unnecessary panic by forwarding it.

Clinical Director of the National Kidney Foundation Leituala Dr. Ben Matalavea also expressed disappointment in those creating and forwarding such a message.

“This is absoltuely irresponsible. There is no such thing at present!”

“There are only those isolated but that’s Samoa’s stance as a precautionary measure for whoever comes from an infected area, they must be quarantined for 14 days”, he added.

Fake News – Do Not Forward.

“2 confirmed cases of the Corona Virus in Samoa. Two Samoan students were quarantined and are being tested and monitored at the Faleolo hospital. It has been CONFIRMED that they are infected.We could not send them back as they are citizens.
MOH failed to test all othrr flight passengers on the plane that the two students came in.
Letting you all know so that you are aware and are vigilant. Info passed and confirmed from a very reliable source.”

MFAT and China Scholarship Council Have a Contingency Plan for our Students.

Earlier this week Samoa’s Ministry of Foreign Affairs and Trade (MFAT) confirmed that the Embassy in China was closely monitoring the wellbeing of all Samoan students and gave assurance that there were contingency plans in place.

“All students are well and advised to observe precautionary measures such as using face masks, keeping away from crowded areas, and restricting movements out of their university compounds to necessity”.

“MFAT continues to liaise with the China Scholarship Council regarding contingency plans for the students.”

“We are closely monitoring the situation with all students; we are in contact and and keeping open communication lines with all parents”.

Samoa was the first Pacific Island to put in place Travel Advisory and Restrictions to protect it’s borders since the coronavirus outbreak.

Two Sailors in Quarantine as a Precautionary Measure.

Two Samoan sailors who arrived on Sunday night have been placed in qaurantine for a period of 14 days at the Faleolo District Hospital as a precautionary measure after the pair spent two days transiting in China on the way to Apia.

Speaking to Samoa Global News a Healthcare worker says that although they showed no symptoms of the virus, the two sailors agreed to fully cooperate with Samoa’s special travel restrictions for the benefit of the nation.

“They understand the magnitude of global outbreak because of what they’ve seen and have fully cooperated with health authorities”.

“They just asked that their families were contacted. We do also want to protect their privacy as well.”