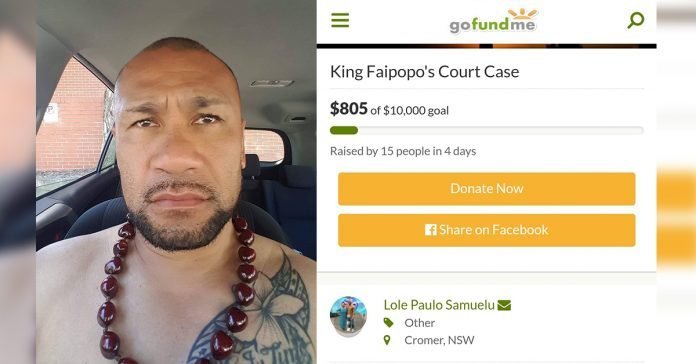 21 February 2019, Apia Samoa. Assistant CEO of the Ministry of Justice and Courts Administration has clarified that there is no arrangement whereby Malele Paulo who faces charges of misleading information towards Samoa’s PM, is required to pay a bail bond before travelling to Australia to await his Court case.

Ve’atauia Fa’atasi Puleiata responded to questions from Samoa Global News in regards to Malele Paulo aka “King Faipopo” who has called for public support through a Go Fund Me Page on Facebook that states he is seeking finances for a bail bond.

Ve’atauia said that King Faipopo’s bail conditions were to surrender his travel documents and sign at the Apia Police Station every Friday. He confirmed that there was no such arrangement as a “bail bond” to be paid before Malele Paulo is able to leave the country.

“There is a stop order at the Immigration prohibiting him from leaving the courty.”

King Faipopo’s Go Fund Me Page states, “We are asking for your support so that he can come home to his wife and young children who need their dad.

“His family have been advised that he will need financial assistance for his defense and bail bond so that he can come home and then return to Samoa to attend his court case.

“His first court appearance will be on the 5th of March, and so therefore we need the financial assistance as soon possible.”

When contacted Malele Paulo said the page was set up by SSIG Australia and his wife.

At the time of publication, a total of $805 has been raised and 15 people have already shown their support by donating to King Faipopos Go Fund Me page.