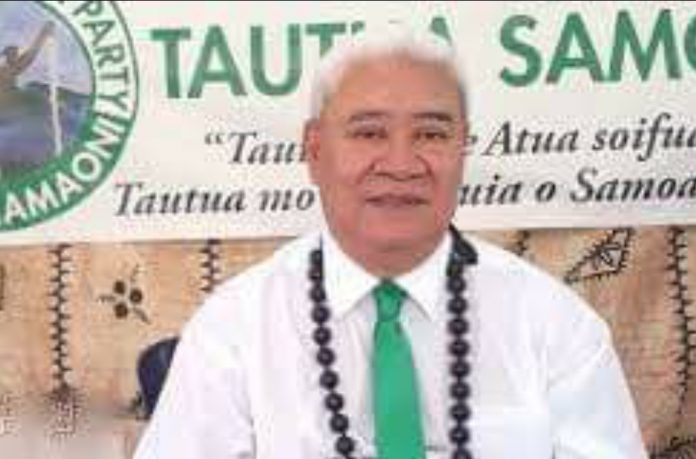 26 June 2021, Apia Samoa. A Supreme Court decision handed down on Friday morning found the leader of the Tautua Party, Afualo Dr Wood Salele, guilty of one count of bribery in relation to the events arising from a church service he attended to give the sermon as a lay preacher (failauga) in one of the constituency’s villages, held two weeks before the April 9th general elections.

Afualo was the original petitioner against Fepuleai Faasavalu Faimata Su’a, now the confirmed Member of Parliament for Salega 1 (Samata Uta, Samata Tai, Fogatuli, Faiaai and Fagafau). The Courts dismissed all three bribery allegations against Fepuleai, for lack of evidence to prove beyond reasonable doubt that he had intended to bribe voters. Fepuleai was represented by Ms Muriel Lui who made a compelling case of rebuttal supported by seven of the eight witnesses she had called during the trial. Only one witness called by Ms Lui gave evidence for the counter-petition, which pinned Afualo with the single bribery charge that may well have ended his political career.

The incident was a church service at Faiaai Methodist Church, where Afualo had attended as a lay preacher (failauga) to deliver the sermon. As is customary, Afualo received a talilauga of $460 tala – usually collected amongst the congregation and handed over as a gift to visiting preachers.  Afualo and his wife stayed on after church and had toonai with the congregation, again, as is customary for visiting preachers. As they left, the talilauga of $460 was returned the congregation by way of a $300 tala donation and $160 for the church minister’s peleti, as the Methodist church calls donations to faifeau.

In their decision Justice Niava Mata Tuatagaloa and Justice Fepuleai Ameperosa Roma accepted the evidence of Tuisalega Fualaau, 72, as the only witness in support of the counter petition against Afualo. Tuisalega is described as a credible witness, a senior lay preacher ‘failauga faamaoni‘ of the Methodist Church and a paramount title holder of Faiaai village with a deep knowledge of the Samoan culture, his village and church affairs.

“Tuisalega impressed us as someone who has lived and involved himself at every level of a Samoan upbringing… We find no reason to doubt his evidence as to what was said by the Peititoner and what he gave during the toonai.”

The Supreme Court states in its decision that it did not have a problem with Afualo deciding to gift or donate back his talilauga to the faifeau and the congregation.

“In our view the Petitioner was free to donate and gift as he did. It is what the respondent said or talked about prior to donating/gifting the talilauga that concerns us”, states their Honours.

Their Honours acknowledge that there was no rebuttal evidence against the counter-petition brought against Afualo, and state that they had denied the Petitioner’s attempts made on the morning of the trial through Counsel Tufuga Fagaloa Tufuga, to file an Affidavit in his defense.

“We denied the application for reasons that the response was way out of time; no proper application for leave and supporting affidavit was filed; and the Counsel for the Petitioner provided no valid reasons as to why it was not filed within the time. There is therefore no rebuttal evidence against the counter-petition.”

As a result, the judgement sets out what was accepted as undisputed evidence of Tuisalega as follows:

For point number 6, ‘tatala le palota‘ means to open up the freedom that allows villagers to vote for whomever they choose, and not for a single candidate that the village council had decided and endorsed.

The Supreme Court states, In those circumstances, we can reasonably infer that the gifting of the talilauga by the Petitioner was with the dominant motive to corruptly influence the voters at the Methodist Faiaai to vote in his favour…”

During closing arguments last week Counsel for Afualo, Tufuga Fagaloa had said, “If only we were able to present witnesses to rebutt that evidence”.

Justice Niava Mata Tuatagaloa told Counsel he only had himself to blame.

“And who are you referring to? Don’t go there Counsel, that’s on you”, said Justice Niava.

With no reason to doubt Tuisalega’s evidence, and with no rebuttal evidence, the Supreme Court found the counter-petition against Afualo proven beyond reasonable doubt and forfeited security costs of $2,000.

The Electoral Act S121 declares decisions of the Supreme Court in relation to election petitions as “final and conclusive and without appeal, and must not be questioned in any way”.