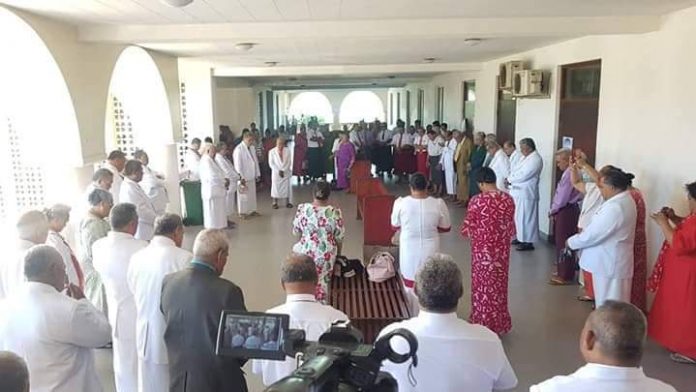 Each church minister (faifeau) faces one charge of failing to withhold tax, and one of failing to file wage tax return with the Ministry for Revenue.

The first group of 20 faifeau also pleaded not guilty to the tax charges following the Church’s 2018 General Conference decision to not accept the newly introduced tax laws for clergymen.

The Church has maintained Alex Su’a as their representative counsel for the new group of faifeau, however he was not available this morning so Tu’i Faasili and Leilani Tamati appeared before Judge Leota on his behalf, while counsel Alesana Tulaga represented the Ministry for Revenue.

Ms. Faasili applied to the Court for the current matter to be heard together with the first group of 20 whose hearing has been set for 1st to 3rd of July 2019.

Judge Leota denied the application, deciding instead to hear the 2 groups separately.

“The application by defense counsel for this matter to be called together with the other matter that is pending is denied,” said Judge Leota.

“This matter is adjourned for hearing on the 28th and 29th of August.”

Last month the CCCS General Secretary Vavatau Taufao announced a Church decision to allocate $1 million tala of its annual approved budget towards the legal fees of church ministers who have been charged. Two separate women’s committees of the Church also pledged donations of $500,000 and $200,000 towards legal fees, indicating the firm position of the Church towards the Government’s tax laws.

“Legal fees are being incurred and this is a necessary cost,” said Vavatau at the time.

“So we have set aside this one million tala for that purpose.”

Outside Court, all church ministers and their wives, family and supporters bowed their heads as Reverend Vavatau said a short prayer before Court proceedings.