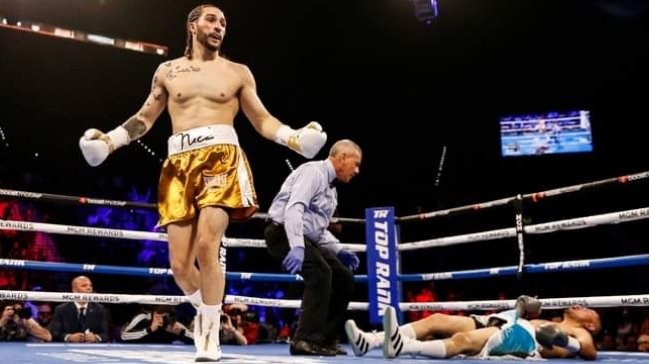 Boxing legend Muhammad Ali’s grandson, Nico Ali Walsh, continued the promising start to his professional career with the brutal first round knockout of Alejandro Ibarra, in a bout featured on the undercard of Shakur Stevenson vs Oscar Valdez at the MGM Grand Garden Arena in Las Vegas.

Nico entered the the ring with a record 4-0, three of those victories coming by way of knockout. It was Ibarra’s second defeat in nine pro fights.

Nico started the fight well by countering Ibarra and landing great combinations off of his jab. Ibarra was absorbing some hard hooks to the body from Ali Walsh, who countered every jab Ibarra tried to throw.

In the final twenty seconds of a dominant first round, Ali Walsh landed a left-hook-right-hand combination that floored Ibarra and rendered him unconscious before even hitting the canvas. Referee Russell Mora didn’t give him a count and waved the fight off straight away.

“I was setting him up with the right hand. I noticed his left hand was going down when he threw the jab. I was trying to counter it, and that’s what I did,” said the 21-year-old Ali Walsh in a post fight interview.

“I wish the best for him and his team. He’s a true warrior.  But I just waited for that setup, and I saw it and I took advantage”.

Following the win, Walsh paid tribute to his late legendary grandfather who passed away in 2016. He explained that his mother Rasheda, gets emotional after his fights because she sees her late father brought back to life when he competes.

“I’m bringing my grandpa back to life, and that’s why mom gets so emotional because she’s seeing her dad again and hearing her dad’s name being called out to me,” he said.

The up and coming boxer said the formular is simply, hard work.

“This is just a testament to all the work I put in. Stuff like this happens when you put the work in”.

While waiting for the inevitable KO decision to be read out, Nico Ali Walsh celebrated with the legendary Ali shuffle in his corner, while the crowd chanted “Ali, Ali”.

“Hearing that chant is so powerful… I used to hear it for my grandfather, and now it’s for me!”.

American professional boxer and activist, Mohammed Ali, nicknamed The Greatest, is widely regarded as one of the most significant and celebrated sports figures of the 20th century, and is frequently ranked as the greatest heavyweight boxer of all time.

Walsh has now won all five fights since turning professional last August, with four of his wins coming by knockout.

Ali Walsh picked up consecutive knockout wins in his first two professional appearances against Jordan Weeks and James Westley. He was taken the distance against Reyes Sanchez later that year, but picked up another stoppage in his fourth fight this January against .