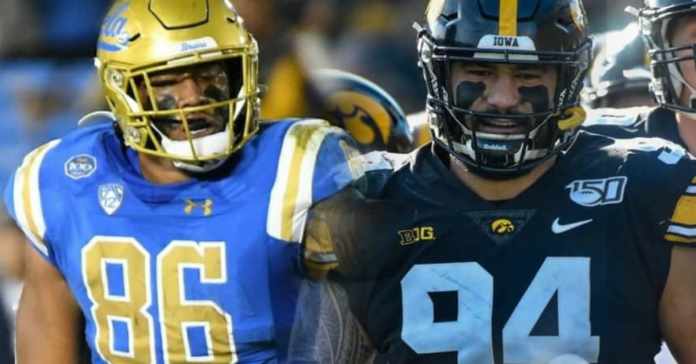 AJ Epenesa, 21, was the first of the two to be drafted. He was picked up by the Buffalo Bills in the 22nd pick of the 2nd round, or 54th overall.

This feat is no surprise as he was a football and discuss All American in High School, a testament to his athleticism.

Following a junior season with 11.5 sacks, 4 forced fumbles, and 49 tackles, Epenesa announced that he would forgo his senior year and declare for the 2020 NFL Draft.

Bleacher Report Analyst Connor Rogers stated minutes after the selection that Epenesa is a better player than Shaq Lawson, a defensive end the Bills released late in 2019.

“I’ll come out and say it – I think he’s an upgrade over Shaq Lawson,” Rogers said.

Coming out of High School the now 22 year old of Samoan and Tongan decent was ESPN.com’s No.44 prospect in the nation in their ESPN 300 list.

During his senior season at De La Salle, he hauled in 17 catches for 311 yards and five touchdowns on offense, and finished with 49 tackles, five pass breakups and four sacks on defense.

He has gone on to be one of UCLA’s best offensive weapons putting up 771 receiving yards and 5 touchdowns in his two year tenure.

Bleacher Report Analyst Matt Miller has come out to say Asiasi will be the Number 1 Tight End for the Patriots instantly.

The NFL goes for 7 rounds. Yesterday, quarter-back Tua Tagovailoa became the third Samoan to be drafted in the Top 5. Marcus Mariota was Pick #2 in 2015 and Jack Thompson Pick #3 in 1978.