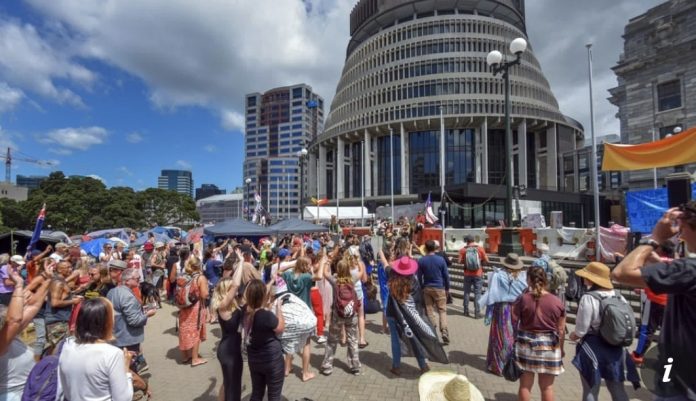 Sunday 27 February 2022. As the New Zealand Ministry of Health has issued a warning to protestors as hospitalisation numbers rise to 305 with the daily count of new cases at 14,941 as of Sunday afternoon.

“We are also beginning to see people who have attended the protest at parliament, a location of interest and potential super-spreader event, showing up in hospitals around the country after returning home,” stated the Ministry in its Saturday afternoon update.

“We advise all those currently at the protest, or who have been at the protest, who are displaying cold and flu symptoms to get a test and isolate until they receive their result.”

At its daily updates the NZ Ministry of Health states on Sunday afternoon there are 350 people with Covid-19 in hospitals. Thirty four cases or 14% are reported to be unvaccinated including those ineligible. Five covid-19 cases are reported to be in ICU and the Ministry has reported one death in its latest update, said to be a covid positive patient who “died from an unrelated medical condition” in a Northland hospital. The average age of those in hospital is 52.

“The growth in hospitalisations and patients in ICU is not unexpected,” said the Ministry statement. “It has been planned for and is another reminder that vaccination is our best defence against Covid-19.”

The anti-mandate protestors have been camped infront of New Zealand’s Parliament House in Wellington going onto  three weeks now, stating they would camp “for up to three months” if they are not heard by parliamentarians. Last week NZ Police told local media three officers were taken to hospital for a medical assessment after being sprayed with a stinging substance, while other officers escaped injury after a protester drove a car at police as they tried to reduce the perimeter around the occupied area.

Protestors include those who have lost their jobs through the NZ government mandate to remove any frontliners who refuse to be vaccinated.

Three unvaccinated defense force personnel who applied for a Judicial Review of the mandate received a successful ruling from the Supreme Court – setting aside an order that required all members of the defence force, police constables, recruits and authorised officers to have two doses of the vaccine by 1 March, or face termination.

Justice Cooke stated that the court’s conclusion should not be understood to question the effectiveness and importance of vaccination. “The evidence shows that vaccination significantly improves the prospects of avoiding serious illness and death, even with the Omicron variant. It confirms the importance of a booster dose given the waning effect of the first two doses of the vaccine..

“But the order made in the present case is nevertheless unlawful and is set aside.”

Protests Against Other Mandates

Other protestors state they have the right to decide to wear masks and resent being mandated to do so.

A protest along Auckland’s Harbor Bridge on Saturday saw three Samoan flags at the front of the protest march, just behind a banner stating, “HANDS OFF OUR FREEDOMS & RIGHTS”.

The group sang and chanted as they made their way across the bridge, “You can stick your vaxi-mandates up your @$$”.

From a live Facebook coverage of the Auckland Harbour Bridge march posted by organizers on YouTube, some Samoans commented to disagree with the use of the national flag by those involved.

“Faaoga sese le fua a le akuguu” (“Wrong use of the nation’s flag”).

One comment made reference to Samoa’s Treaty of Friendship with New Zealand, stating they felt for the friendship between Samoa and New Zealand. (“Kalofa ia Samoa ma laga faigauo ma Niu Sila”).