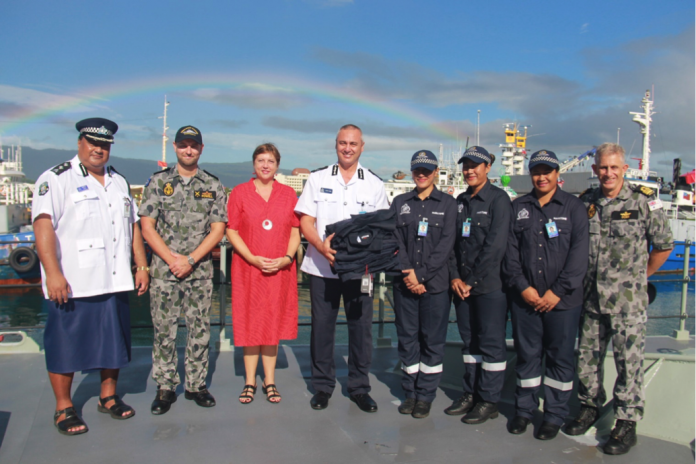 29 May 2019, Apia Samoa. Today the Government of Australia gifted new uniforms to the women’s division of the Police Maritime Wing to be worn as part of their new kit for the Guardian Class Patrol Boat Nafanua II.

All members of the Police Maritime are now provided with the appropriate safety gear and uniforms as they prepare to leave Samoa for further training in Australia.

Nafanua and her crew will sail to Australia on Wednesday 12 June as part of the Guardian Patrol Boat transition program. The crew will spend 10 weeks in Western Australia undertaking courses, familiarisation training and then sea training certification prior to 6500Nm sailing the Nafanua II from Fremantle to Apia. The Nafanua II is scheduled to arrive back in Apia on the 4 October.

The uniforms were presented by Australia’s High Commissioner, Her Excellency Sara Moriarty to the Police Commissioner, Fuiavailili Egon Keil.

Ms Moriarty said “Australia is committed to strengthening our Pacific partnerships through stronger ties for security, and relationships between our nations,”

“We hope these uniforms will be of great value, particularly with the arrival of the new Nafanua II – a bigger, more capable patrol boat that will enhance Samoa’s capacity to secure its ocean resources and maritime domain.”

“Samoa will be the first in the Pacific to have women posted to sea when the Nafanua II arrives – which is a significant feat in paving the way for future women seafarers not only in Samoa, but the Pacific region,”

“We look forward to further strengthening our people-to-people and community ties with Samoa, and across the Blue Pacific,” she concluded.