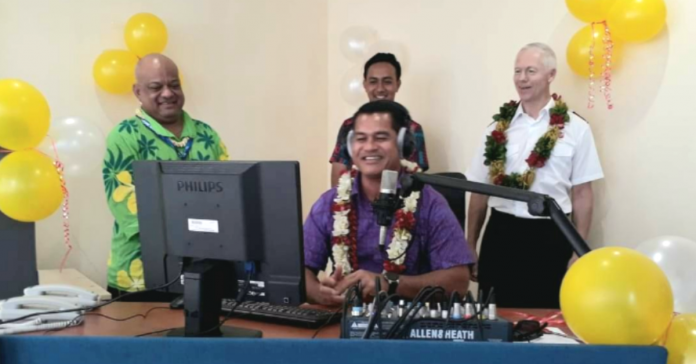 06 July 2019, Apia Samoa. A new radio station called “Go FM Samoa” that will cater for the needs of Senior Citizens in terms of song choices and discussion focus officially opened at Fugalei this week.

Speaking to Samoa Global News, Mr. Crichton said there were many challenges in setting up the station and one of the challenges was the process of registration and licensing.

With an estimated set-up cost of $150,000 the radio station which took nine months to establish is owned by Atanoa Herbert Crichton with its major shareholder Tuiaopo Andrew Ah Liki.

“Its been a big challenge with the long process to setting this up;

“I was thinking it will happen in 3 months max but it didnt happen that way.”

“The first application went in on September 2018 and we just got the frequency okay in March of this year,” he said.

“Then we were going to launch it at that time, but we had another problem with the interference of the signal then we had to wait for another 11 weeks.”

Despite the challenges Mr. Crichton said he didn’t give up, and the timing of the launch could not have been better with the Pacific Games launch this week.

The Minister of Communication and Information Technology, Afamasaga Rico Tupa’i congratulated the owner and staff of Go FM Samoa for being patient while everything was being processed.

He added that part of the delay was from his Ministry however, they had to make sure that proper process and procedures were being followed.

Mr. Chricton is no stranger in the media industry, he was the former General Manager of TV3 for some time while it was owned by the late Joe Keil.

He acknowledged the support of everyone who stuck by him during the establishment process.

“I want to acknowledge God first for being so faithful, my family and my wife for believing in me,” he said.

“Go FM will do its best to cater for the needs of people of all ages in Samoa.”