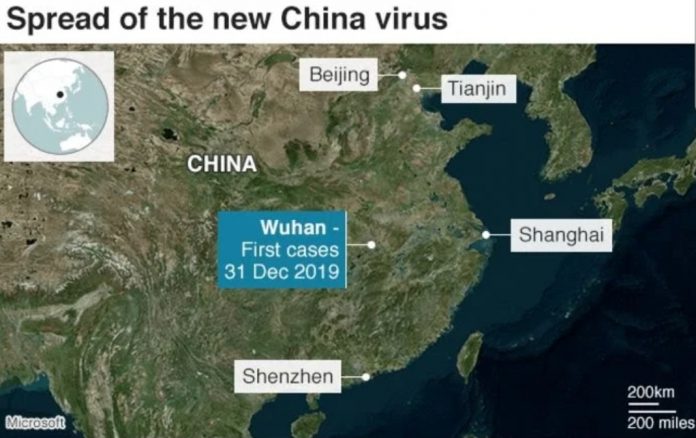 The new coronavirus that has claimed 6 lives and close to 300 confirmed cases originated in China’s Wuhan city and has now been reported across major cities including Beijing and Shanghai.

Wuhan is a central city of 11 million where the disease was first identified late last year and the outbreak believed to be linked to a seafood market that also sells live animals.

Wuhan is closer to Samoa than we think.

Beijing based Samoa Ambassador to China Tapusalaia Terry Toomata says he there are 10 scholarship students studying in Wuhan.

In a post on social media Tapusalaia says, “Monitoring this deadly virus as outbreak concerns increase especially with Chinese NY holidays about to start… We have 10 students in Wuhan where the virus first appeared and we are in contact. Schools on holiday for Chinese NY break til late Feb.”

The Ambassador says he is keeping a close eye on the situation.

“Some students are currently overseas now during winter break and those in Wuhan are ok.”

In Australia, a man who had travelled to Wuhan has been placed in isolation and is undergoing tests. China is the largest source of tourists to Australia, with more than one million people visiting last year.

The Need to Step Up Border Controls

In Parliament yesterday opposition MP Olo Fiti Vaai said Samoa should take early precautions to protect its borders from the spread of the coronavirus.

The Member for Salega i Sasa’e called for a Global Epidemic Plan or a Pandemic Emergency Response Plan to protect Samoa.

Prime Minister Tuilaepa Sailele Malielegaoi responded that he and the Ministry of Health were well aware of the situation and have already taken action.

Ambassador Tapusalaia had also commented about the need to impose border controls for Samoa.

“Border quarantine for passengers from China and Asia to Samoa especially via Nadi is essential,” posted Tapusalaia.

Authorities in Australia, Singapore, Hong Kong, Taiwan and Japan are already reported to have stepped up screening of air passengers from Wuhan.

The World Health Organization (WHO) will on Wednesday consider declaring an international public health emergency over the virus – as it did with swine flu and Ebola. Such a declaration, if made, will be seen as an urgent call for a co-ordinated international response.

How Fast is the Coronavirus Spreading?

There are fears that the virus could spread swiftly – and further across the country – as millions of people across China prepare to travel home for the Chinese New Year holidays later this week.

This mass movement of people could also mean that authorities will not be able to monitor further spread of the disease and experts say there already could be many cases going undetected.

A report by the MRC Centre for Global Infectious Disease Analysis at Imperial College London suggested there could be more than 1,700 infections. However, Gabriel Leung, the dean of medicine at the University of Hong Kong, put the figure closer to 1,300.

A handful of cases have also been identified abroad: two in Thailand, one in Japan, one in South Korea and one in Taiwan. Those infected had recently returned from Wuhan.

China’s National Health Commission on Monday confirmed for the first time that the infection could be transmitted from human-to-human. It said two people in Guangdong province had been infected in this way.

In a separate statement, the Wuhan Municipal Health Commission said at least 15 medical workers in Wuhan have also been infected with the virus, with one in a critical condition.

The workers presumably became infected with the virus due to contact with patients. All of them are being kept in isolation while being treated.

China has Issued Stern Warnings Against a Cover Up.

China’s top leaders have warned lower-level officials not to cover up the spread of the coronavirus publicly stating that anyone who concealed new cases would “be nailed on the pillar of shame for eternity”.

The warning came as state media confirmed the virus can pass from person to person and causes a type of pneumonia.

Ensuring History does not Repeat Itself

The outbreak has revived memories of the Sars virus – also a coronavirus originating in China – that killed 774 people in the early 2000s across several countries, mostly in Asia.

China initially withheld information about the epidemic from the public. It later vastly under-reported the number of people that had been infected, downplayed the risks and failed to provide timely information that experts say could have saved lives.

Analysis of the genetic code of the new virus shows it is more closely related to Sars than any other human coronavirus.

Chinese President Xi Jinping has called for “all-out efforts” to control the outbreak, according to state media, including quickly making information available and taking measures to “guide public opinion”.

In its commentary published online on Tuesday, the Communist Party’s Central Political and Legal Commission talked of China having learned a “painful lesson” from the Sars epidemic and called for the public to be kept informed.

Deception, it warned, could “turn a controllable natural disaster into a man-made disaster”.

What Do We Know About the Virus?

The virus, known also as 2019-nCoV, is understood to be a new strain of coronavirus that has not previously been identified in humans.

It is believed to have originated from infected animals at a seafood and wildlife market in Wuhan.

Coronaviruses are a broad family of viruses, but only six (the new one would make it seven) are known to infect people.

The World Health Organization has advised people to avoid “unprotected” contact with live animals, thoroughly cook meat and eggs, and avoid close contact with anyone with cold or flu-like symptoms.