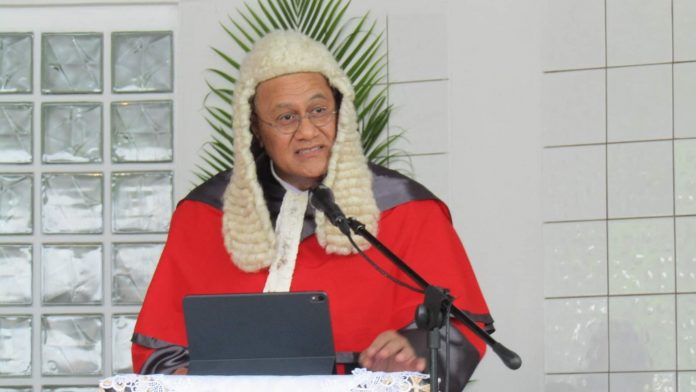 The swearing in ceremony for Samoa’s new Chief Justice, Satiu Simativa Perese was held at the Head of State’s residence at Vailele this morning, well attended by members of the Judiciary, Cabinet, Diplomatic Corp and former CJ Patu Tiavasue Falefatu Sapolu.

In his address, the new Chief Justice spoke at length about his extended family roots, giving a summary and historical account of his parents, grandparents and an uncle who was the Commissioner of Police.

“My uncle Timani Samau was a Police Commissioner for Samoa, who also competed in national elections”.

The Chief Justice also went on to talk about his great-grandfather who was a judge of the Lands and Titles Court.

“This is the most important role that I will ever come to have in my work as a lawyer”.

Satiu spoke of his late wife, who died of cancer in 2010 when their youngest of two daughters was only 14 years old.

“Her love and support helped me develop belief and confidence, and to engage with some of the brilliant legal minds in New Zealand and across the world”.

Satiu said they had always prayed of retiring to Fagaloa Bay, where he would build a fale on the famly land.

“To our girls, I want to say, ‘You are my inspiration, I love you and I pray that God will continue to love, bless and keep you safe always'”.

Satiu Simativa Perese said that the calling to be a Chief Justice of Samoa requires honesty and integrity, with a focus on serving the people.

He thanked the former Chief Justice Patu Tiavasue Falefatu Sapolu for setting a good example and for the foundational work at the Ministry of Justice. He also thanked the Prime Minister who appointed him.