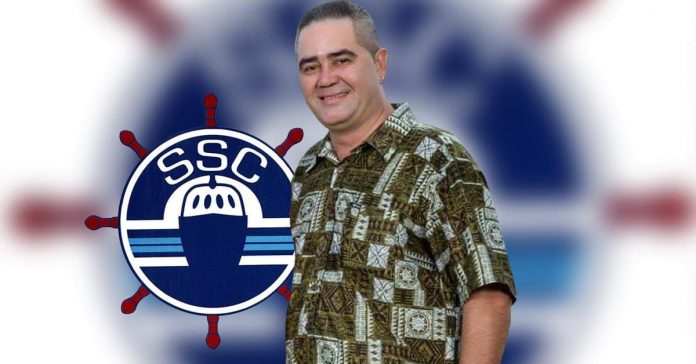 The Samoa Shipping Corporation (SSC) has a new Chief Executive Officer. Leiataualetauā Samuel Decca Phineas moves to SSC from the Office of Tokelau Affairs where he has held the position of Operations Manager.

No stranger to SSC, Leaiataualetauā had previously held the position of Assistant General Manager Operations for six years before moving to the Office of Tokelau Affairs.

Responding to questions from Samoa Global News, Leiataualetauā, 41, said his vision for SSC is to maintain its current service, “to provide quality, reliable, efficient and safe shipping services in Samoa and neighbouring islands”.

A Samoa College Old Pupil, the new CEO said he had an introductory meeting with SSC Chairman Afioga Matataualiitia Afa Lesa today, and hopes to continue the work of his predecessor in seeking opportunities to improve profitability and sustainbility of the Coporation.

Leiataualetauā has big shoes to fill as he replaces Samoa’s longest serving CEO, Papalii Willie Nansen. Papalii gave 32 years of service to the Samoa Shipping Corporation; 18 of those as their CEO.

His qualifications include 2nd Mate Foreign Going Cert (NZMS), Master Class 2 Certificate (MWTI) and Maritime Auditors Certificate (APMI). He was also employed as a seafarer, Senior Lecturer at the School of Maritime and an Officer onboard Foreign Going Ships.

Leiataualetauā and his wife Angie Palu-Phineas have 4 boys and 3 girls.